on December 11, 2017
Fabrice Breton brings Vita owners a delicious slice of arcade roguelike action in the form of his Vita port of Diabolical Mind's Xenon Valkyrie +. The plus indicates the game has various gameplay improvements over the PC original, but since I'd never heard of the game until recently, its all new.

A blocky little pixel actioner,  you land on an imperiled planet where an evil witch has taken control of the machines. Starting off by picking from one of three crew, weak but nimble, strong but slow etc. Initially, you have a couple of easy levels to explore, learn the ropes and level them up to face the first boss, with much tougher battles beyond that. 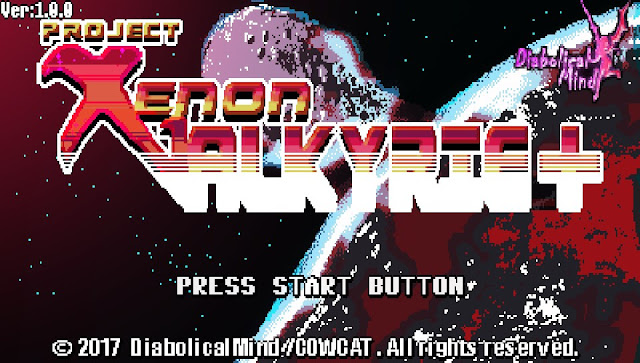 Your crew ventures out into that first Ancient Techforest. Armed with swords, guns with limited ammo, grenades and the odd special move like a super-leap to reach higher areas. More importantly, they each offer a slightly different route through the game, with a few special areas to uncover.

Whoever you chose, they stumble around the randomly generated levels, as you learn how to deal with the killer robots on patrol, the radar comes in handy in this respect. Note there's no penalty/death for falling, but deciding when and how to use your sword or gun is a key life skill.

Another tactic is wall climbing and learning how far you can jump or how to get into the narrow gaps where chests packing health and credits may be stashed. Spend a little time learning the ropes, like letting the enemy kill each other, and you can save a lot of pain!

Most levels feature a locked treasure chest that might have a better weapon, a useful tool or just a random piece of crap. Also, if you finish the first level without losing your shield, you get some extra bonus strength points that make your weapons more powerful! 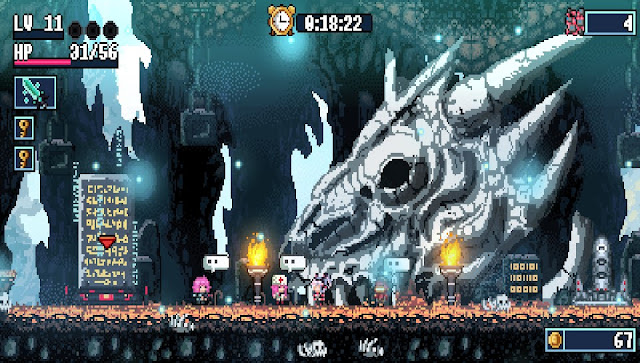 Leveling up your strength and defence is key, but depends on the weapons you find. Also, finding cash is important as, at the end of each level, you can buy some stock goods like shields, ammo and health. There's a surprising amount of thought that can go into each run, but still, there's nothing quite like racing through the level leaving a trail of carnage in your wake.

A key trick when you reach the portal is the ability to return to the top of each level, a wise move if you missed a chunk out through a big fall or found a good chest but couldn't reach it from below. Sure it takes time, but could add valuable coins and experience levels to your haul, a lovely touch!

In the early going, learning about the game is vital. Some enemies can be easily killed just by whacking them from a safe ledge above or below. Others will explode after a few hits, so you need to worry about damage or plan to have them blow a useful hole in the scenery. Later enemies leap around madly, requiring careful planning or luck (in fact, mostly luck) to survive. Figuring out who does what and how to get around will help build your character up for those boss battles. 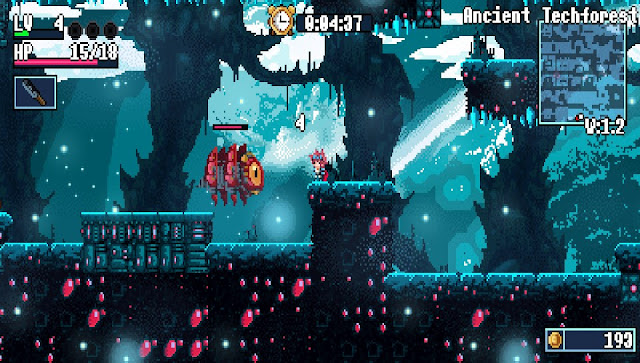 In these, the screen is dominated by a trigger-happy fiend who will take a little more figuring out how to kill. Beat him, her or it, and you can take a breather before the next battle. If you've found enough rare metal Teamerite, you can trade it in for some proper rare weaponry, before setting out again to the deeper levels.

As the opposition gets tougher, and the levels more complex, you can use grenades to blast rocks and create your own paths, ideal for accessing that hard to reach reward or to make it easier to kill sterner enemies. But, with leaping, exploding creatures all around survival becomes a serious challenge the deeper you go. Get even further and some robot drones can be hired to help with extra firepower or other useful abilities.

If you want a closer look, check out 12 minutes of gameplay here. With lots of little rules and skills, you do need to pay attention. Pure fun to play, Xenon Valkyrie is packed with challenge, for such a little game. The desire to do better on my next run after yet another permadeath hasn't worn off yet, and to find out what the other tools are weapons are. The chiptune soundtrack is sumptuous and the tiny graphics work well on the Vita's screen.