on December 29, 2017
Let's game like its 1992, as Stately Snail's One More Dungeon takes a leaf from the original flat-plane pseudo-3D Wolfenstein game and wraps it up in a dungeon-RPG style randomised adventure set over nine compact levels.

Sealed underground, your rogueish character armed with a magic wand and a short sword must explore and survive the blocky-pixel horrors within. Bats, rats, spiders, ghosts and traps are just some of the perils as you squint down each mossy corridor, hoping for health or a top-up for your fire, ice or other magic weapons, but mostly its monsters or annoying dead ends. 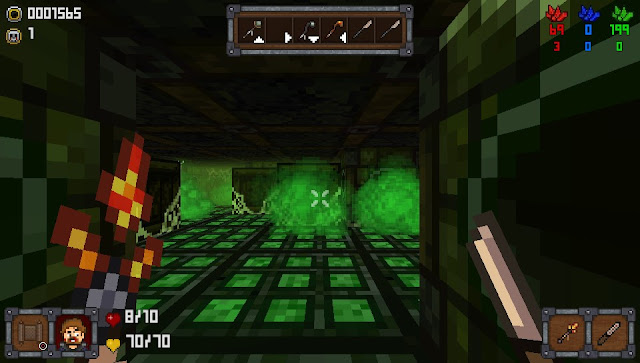 You'll probably waste a lot of ammo at first, figuring out that the oddly animated eye-ball or gloopy plant isn't actually an enemy, while the hidden secrets will keep you running around a level for ages, looking for every last bit of help. There's the odd bout of crate bashing for items which might provide a bonus, or might not, all the while praying you don't get jumped by a lurking beast that can sap your last bit of health.

With most enemies lobbing rocks or poisonous spit, keeping them at arm's length is essential, so our hero relies on magic to kill from range. Learning how close you can get to a monster before they activate is a key survival skill. Upgrading to better weapons in a randomly-appearing shop, operated by a very strange naked caveman, or finding them by luck will help. But keeping up your magical ammo and maintaining health by trading coins is another random option. 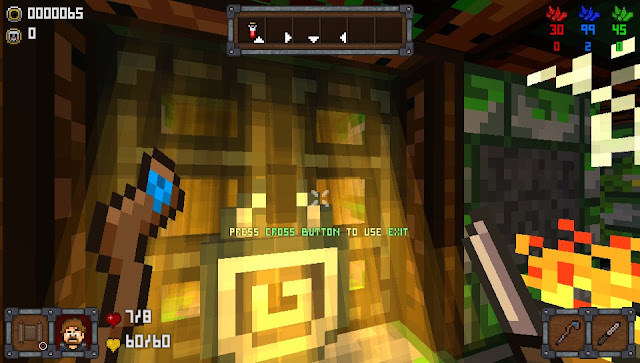 Even so, too often, you are faced with an unwinnable situation, thanks to a gathered horde. To lighten things up, portals can zap you to other bonus areas where coins, magical powers that consume your mind energy, or tougher enemies might be on the menu, but finding each level's overlord and taking the key to the exit from its corpse is the main aim.

With a lot of roguelike Vita games available, unfortunately, the random nature of OMD counts against it, as there's so much that can be lost in the jumbled clutter of each level and the sudden onset of death. Many other games make their progress system fairer or more enjoyable.

OMD relies on mutators, earned after collecting enough points, that change the game state to make it easier (or tougher) to play next time out. But, they don't make it more entertaining to play, which is a shame. The lack of any story, or a little humour, also flattens the experience somewhat. 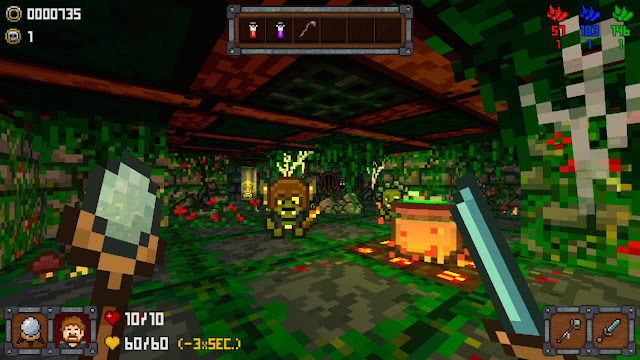 It is good to see the old blocky 3D engine making a comeback and there's plenty of scope for Stately Snail to add more features, skins and build some proper adventure, action or RPG experiences from their underlying tech.

However, this is one of the first games I've been able to compare on my Vita and new Switch, and it is obvious to see the Vita's sluggishness. Therefore, any evolution of the engine is likely to bypass the aging Sony hardware.

I'd like to love this game a little more, but - while strangely addictive - it really isn't that fun compared to Xenon Valkyrie + or many of its pixelly brethren. Why can you auto-pick up some things, and have to press X to grab others? Why is there often a shop on the first level or a load of chests when you have no coins or keys? I guess, sometimes, too much random can be a poor substitute for a well-designed game, especially when something as iconic as Wolfenstein started the ball rolling.