on October 10, 2017
Just when you think people are running out of ideas for puzzlers, along comes Semispheres, a twin-stick mental challenge with a roster of cunning twists to turn your brain into soup. Spread over 13 levels of four/five challenges each, your simple aim in life is to guide two drones to the finish portals.

The game arrived on PC earlier this year and is a pretty fast port to the Vita and other consoles, with a stack of kudos and awards behind it. So, well done to Eastasiasoft and Vivid Helix for getting it to console pronto.

The early levels have the two blobs helping each other out, avoiding relatively robotic guards, while remaining fixed on their half of the screen. But soon they can switch places on maps, make distraction sounds in each other's half through portals and other tricks to add a fresh level of mental dexterity. Imagine playing two games of Volume at once, and you're pretty much there.

There's no time mode that I'm aware of, and Sid Barnhoorn's ambient soundtrack leaves you to solve each puzzle in your own pace. Visually striking with a rich layer of detail and some pleasant lighting, it feels very charming, while trying to scramble your mind.

Complete a set of puzzles and you get to see a few frames of the story behind this adventure, but in play everything is pretty ambiguous. What are the guards guarding, are your twins blobs, drones, a symbiotic jellyfish? Who knows. 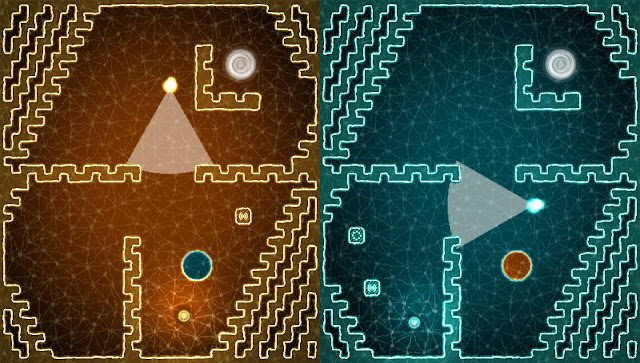 Sometimes you need to finely time both characters' progress at once, on other levels its a step-by-step process with some back and forth. Being zapped by a guard can often be a useful tactic, and sometimes you can iterate one trick across the two halves to make progress, while at other times you are trying two very different tactics. 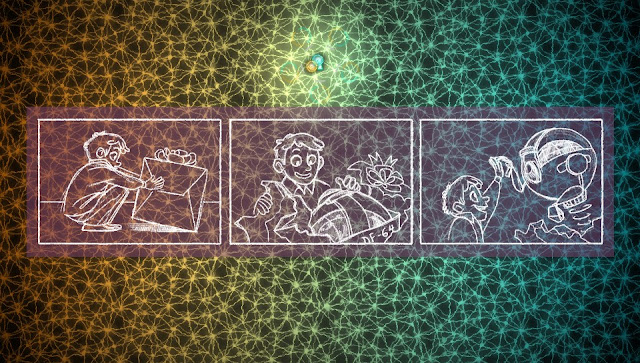 All of these tricks leave your brain trying to keep up as the puzzles get tougher, controls reverse as the drones swap over, across what is a deeply cunning challenge. Still, you're well rewarded with a solid stream of gold and silver trophies for making steady progress, for one of the more rewarding games out there. It is a little pricey for what's a very short game with little replay value, but those puzzles do make it a great couple of hours.