on October 05, 2017
The Plague Road is not a track anyone would want to take, yet somehow the path to a pox-ridden city is remarkably popular, practically crammed with people in distress. As The Doctor, one with no practical healing abilities, we play a mystery figure aiming to get into the city and solve the plague.

On the way, there are survivors to find that are sent to a nearby farm, where they will be revealed as various useful characters. The Doctor can shoot at distance or wield his sword for melee attacks in turn-based battles that soon become party affairs as you build up a team. 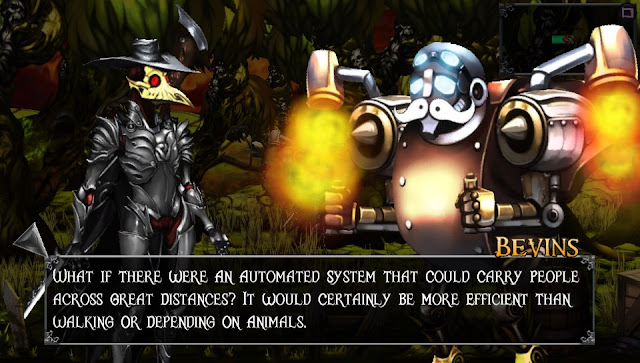 To explore further, we need a small party of warriors to help battle off the afflicted creatures in the plains, woods and beyond. Each encounter leads to a grid- and turn-based battle, with the collection of soldiers, engineers, witches and nurses all providing various levels of support. Each class can have different skills, with a few mass attacks but mostly its one-on-one ranged, magical or melee combat.

Pros and cons of life on the road

When you meet a major figure, they usually need to borrow a couple of your folk to help them out with some request. In return, they help expand your farm, adding training facilities, storage and manufacturing, plus the big bonus of fast travel. Now you zip around the map, you can find loot crates faster and practice your battle skills against the growing ranks of enemies.

The first thing to comment about Plague Road is the production values. With soaring music, fantastically created characters and a bizarre world that they live in, this is punching well above its weight in the presentation department.

It looks gorgeous and the characters scale in and out of the level so smoothly. The sound effects are punchy with some great weapon effects (love the rocket barrage), and the music is an atmospheric treat. Little zooms in-and-out of the battles are perfect, while the hellish parallax backgrounds scald your eyes.

But then we come to some missed opportunities. For a start The Doctor just blunders into a battle, with no real strategy or tactics. It would be cool to avoid combat but the lovely trees and other trimmings that make up many levels serve no purpose, even though it would be useful to hide behind them. There's no level progression in battles, and no real point in having them and no complexity like friendly fire or fire lines to make you think a bit more.

Also, you need to retire survivors to create skills in the farm buildings, this isn't explained anywhere and is just one of the confusing aspects of the game. Why are the levels procedurally generated every time you visit? That makes no sense, change them every playthrough yes, but not every time you visit somewhere you've already cleared. 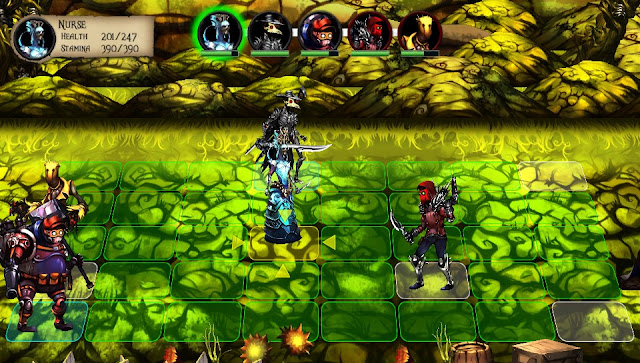 There's also that horrible feature in any combat game where an enemy with just a few hit points requires you to wipe it out with a powerful attack, wasting stamina. Surely a little Worms-like nudge or standard-for-all punch attack to finish them off would have added a little more fun to the battles, or make the game feel more rounded.

Some logical thinking around these, and a few other minor leaps of imagination would have helped make Plague Road so much more than it really is. Hopefully, a major update will add new features to the game, or perhaps the busy developers should rein in their ambition a little on future projects. A minor update to fix the random crashes would also be welcome.