on August 18, 2017
The sheer excitement for Undertale, stemming from its E3 announcement for the Vita and PS4, isn't exactly borne out when you first get started with the game. You, a Simpson's shade-of-yellow pixel character, meander around a simple-looking realm of the undead, meeting a bizarre roster of characters.

The million-selling PC title, which I've never played, comes to the Vita and fits perfectly on the small screen. Text is readable, controls are tight, jokes are universal and those pixels are as crisp as ever. 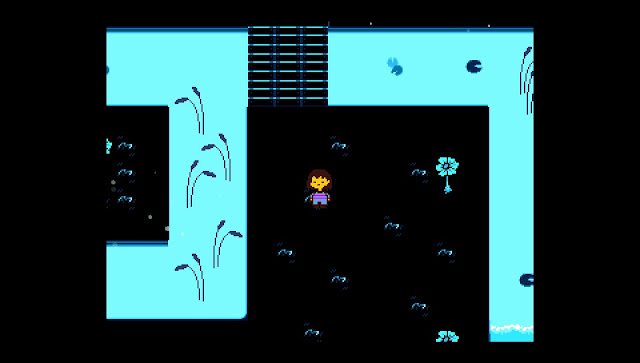 Stick with the game beyond the opening house and snow village 'Snowdin', and you soon get a grasp on why the game is so loved. Firstly, there's the sense of humour, which varies from edgy school grade jokes to punchlines delivered long after you'd forgotten about the feed.

Then, there's the non-puzzle puzzles, RPG in-jpokes, the mystery unopening doors, the backstory to even the most generic of characters, that in other games live and die without so much as a "how do you do?" Finally, there's the sense of tragedy and loss as the tales of the monsters and the underworld are told.

Undertale is unique in that you don't actually have to fight any of the enemies blocking your path. Simply fleeing will avoid the early encounters, while playing with dogs using sticks or balls, petting creatures, outwitting them, or ignoring their attacks or responding to them in other ways can help you avoid engagements and win one of the game's true endings. The further in you go, the more complex these non-fatal battles become.

If you do end up in battle, your heart takes center stage in a small bordered arena, where enemies will launch various attacks. Staying still will outfox some foes, while moving is an essential for other attacks. They are colour-coded, so once you get the rules, you can master the battle, even earning back health points. But why battle, when ghostly music can frighten opponents away? Just one of the many other ways of slipping past a fight!

Winning battles through combat makes you stronger, avoiding fighting or dodging their blows makes you smarter, both of which beg for separate playthroughs, which is hugely encouraged. You do have attack, defence and health stats, but by playing it nice, these are rarely called upon. Play nasty and you can boost them in stores with a regular supply of cake and accessories. 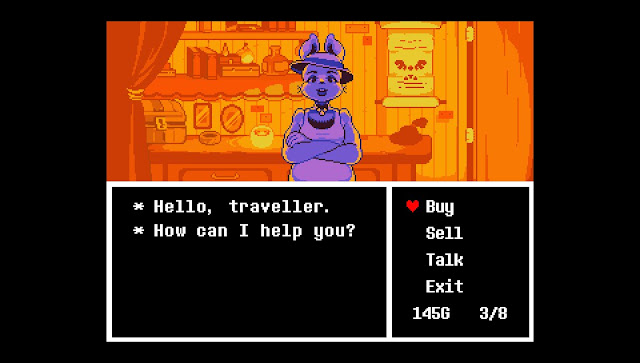 Between each spot of combat or puzzle, the world is littered with endless little witticisms from judgy plants to memes that come to life and characters or situations that mercilessly take the piss out of traditional role players. Shopkeepers are worth having conversations with, just don't try to sell them your pathetic collection of nick-nacks, in fact pretty much everything is worth having a look at.

As a bonus, complete the game, and you can fill out the black border that surrounds the 4-by-3 ratio game with pretty surrounds. This all helps to elevate Undertale above those simple 8-bit looks. It should also serve as a lesson to other RPG makers not to drag out the same old earnest motifs every iteration. And to would-be coders, this is Toby Fox's first game, proving that imagination can outdo technical skill given the right ideas.

Some grumpy buggers might not get the joke, or baulk at a £12 game with no polygons or hellish death battles, but I'd hope they are in the minority.