Sony's financials, all going well, dragged down by movies

on February 02, 2017
Sony's Game & Network Services (G&NS) division was down 7% on last year's quarter, but was up year over year. The big-hitter third quarter ended December 31. The Vita doesn't get a single mention in the report, simply classed as "portable game consoles".

Sales increased 5.2% year-on-year (a 15% increase on a constant currency basis) to 617.7 billion yen (5,325 million U.S. dollars). Sony Movies suffered a series of duds, replacing the mobile division as the pain in Sony's ass. 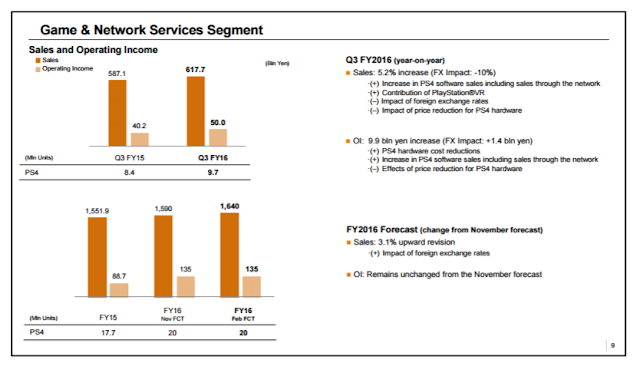 This increase was primarily due to an increase in PlayStation 4 software sales including sales through the network and the contribution of PlayStation VR which was launched in October 2016, partially offset by the impact of foreign exchange rates as well as the impact of a price reduction for PS4 hardware.

Operating income increased 9.9 billion yen year-on-year to 50.0 billion yen (431 million U.S. dollars). This significant increase was primarily due to PS4 hardware cost reductions and the above-mentioned increase in PS4 software sales, partially offset by the effects of the price reduction for PS4 hardware. During the current quarter, there was a 1.4 billion yen positive impact from foreign exchange rate fluctuations.