on February 13, 2017
A beloved PC indie,Vertical Drop Heroes HD from one-man-band Nerdook makes its translation to the Vita. It loses the multiplayer mode along the way, but that doesn't really matter. One of the perfect, short-burst roguelike, platforming RPGs, the Vita feels like a natural home for VDH HD.

Have a few goes, put it down. Come back, have a few more goes, settle into bed, a few more goes and its 3AM, that kind of game! Having just reviewed The Swindle, it is a relief to see that VDH HD makes none of that game's mistakes, it is instantly engaging, always rewarding, and makes better use of its quirky pixel charm. 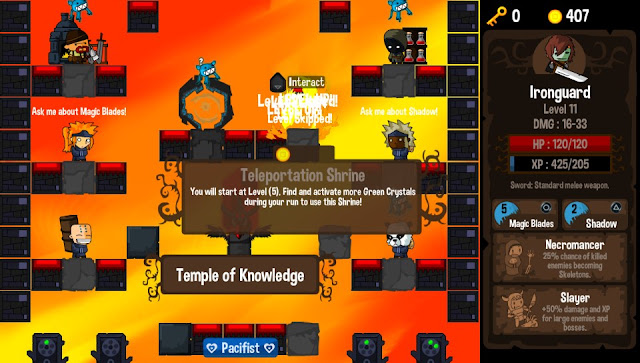 The simpler visuals aren't a problem as you have to focus constantly on what you're stepping on, where you might drop next. And, keeping a checklist of useful things you've left above that you might need to nip back via teleport and recover later.

Each of the 10 procedurally generated levels is a vertical descent into blocky, monstrous, but cute, chaos. The first level is green and verdant, with a smattering of cannon fodder guard monsters, all gnashing teeth, but not that aggressive. Further levels get darker, hotter, and more devious, with more enemy types, environmental hazards, and bigger, nastier bosses lurking at the bottom. 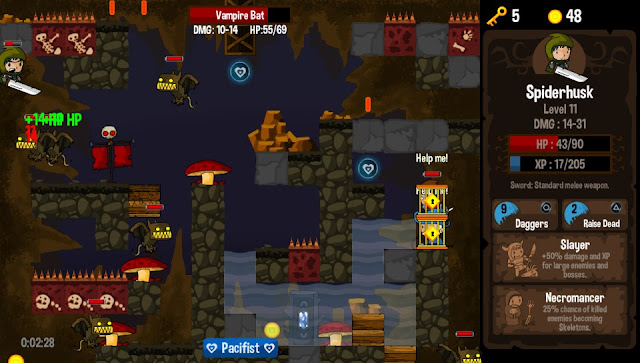 Collecting gold, lying around in chests, or by completing tasks for some (rather too casual) bystanders) allows you to trigger totems that can help aid you with more health, localised attacks or other goodies. You can also rescue wizards, warriors and other heroes (clearly not that heroic) that have been locked up in cages to join your cause.

The big money goes on buying skills that future warriors can benefit from, all this while looking out for collapsible platforms, little hidden extras, ways to maximise your skills or that warrior's particular special moves, there's a lot on your tiny hero's plate in his/her short life. 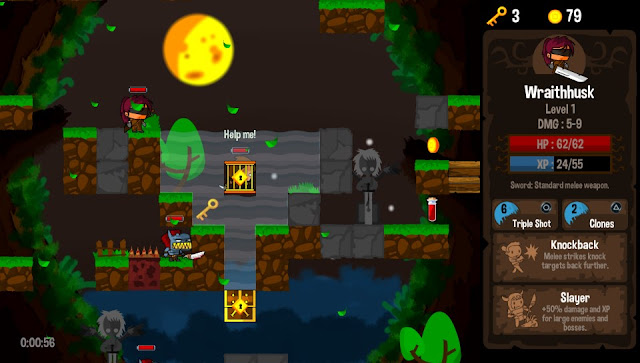 When you die, which usually takes a six-seven minutes at best, you pick another, hopefully slightly more experienced character, and use the shop screen to buy more health, and learn about new skills. Stock up on keys and gold, and you can open teleports to later levels to save on grinding, although with this game, grinding through the early levels is a pleasure!

One brilliant counter feature of VDH HD is the Passive system, when you can try and sneak through the level without killing anyone, except the boss. This gives you huge points and experience bonuses and adds a distinctly different aspect to the game. 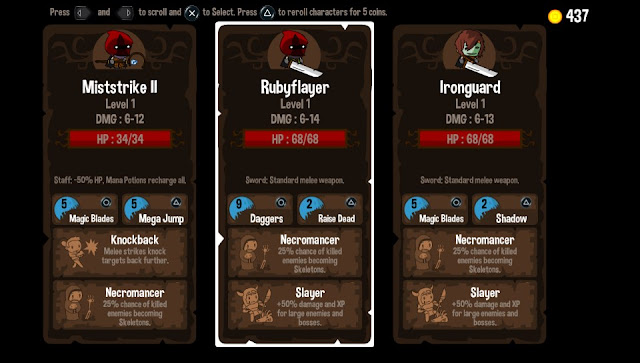 There's a dozen trophies in the game, which feels a bit light, with only a couple that require total mastery to earn. A few more in the midfield might have helped to expand on the challenge, but that's no biggie.

Wrapping up, because I want to go back and play it more, VDH HD is just as fun as Spelunky with a touch more speed, and an exciting ability to throw caution to the wind thanks to your growing powers. It is pretty awesome to drop down into the depths, chucking bombs and spells all over the shop! If you die, you know you'll be back in a minute anyway, but when it works, you feel briefly incredible!