on February 10, 2017
"Police state!" People have cried since the invention of the force. In this Victorian-era steampunk game, the Peelers are about to unleash The Devil's Basilisk, a mass surveillance system of its day, think Sherlock Holmes gone techno-feral.

To prevent this, you have just 100 days to build up your thieving skills, arm your random crim with bombs, hacking powers and leaping abilities to rival Spider Man, before taking on the ultimate heist. Set in 1849, each day is a mission, fail and you lose the collected money that is essential for these upgrades. That's really the core of the this stylish, yet flawed, concept. 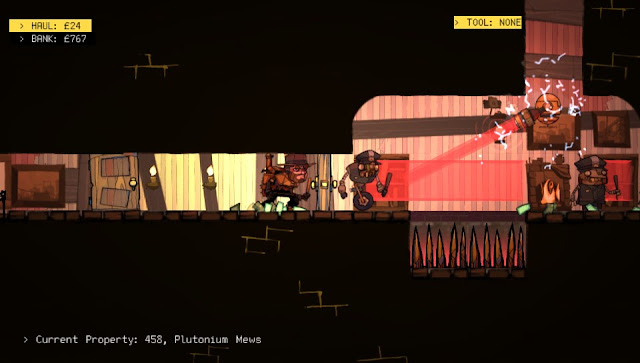 I'll try not to compare it to the likes of Spelunky or Steamworld Heist, which is just as well, as The Swindle doesn't quite match up to them. You start off with no skills and are faced with a procedurally generated property to burgle. Cash lies on the floor, but hacking the steam-punk computers or safes is where the bigger money is. 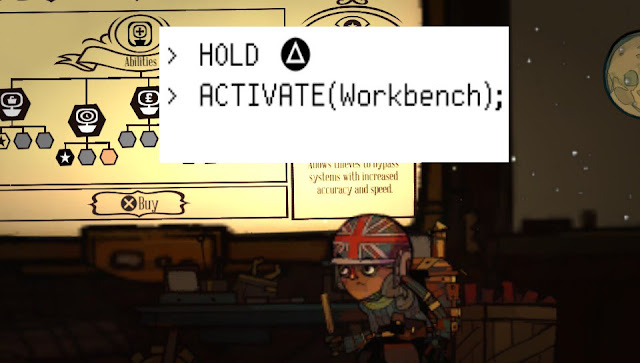 Starting out in the slums, the procedural generation puts guards, floating bots, mines and other obstacles pretty much anywhere, in random concentrations. You will soon learn what's doable and what you need the extra tech, skills and abilities for or what to steer clear of. But these extras cost lots of money, creating a catch-22 situation where you will die lots trying to get big money, and losing it all. 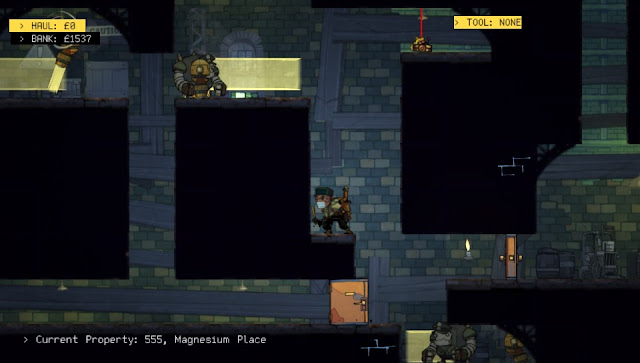 You will die falling into a pit of guards with very short turning circles, so their vision will inevitably focus on you. You will die edging over a pit of spikes or trying to set a bomb in just the right place. You will die trying to break a window to get into the home an alternate way and so on. Still, you have 100 days, so a few blown missions won't hurt right?

When you get it right, you slide down walls, avoid the guard's stare and cosh him on the turn in a perfect leap, then hack the computer before a security beam picks you up, that feels awesome! The Swindle is very compelling and has plenty of one-more-go appeal. Escape without being seen and you get ghost bonuses and keep a thief alive for long enough and sizeable experience points. 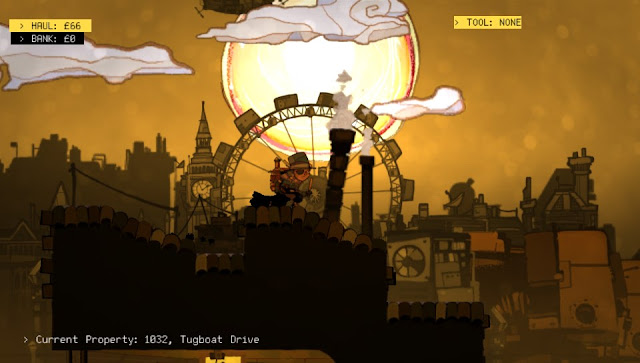 Skills like double jump, hacking, stealth, falling and tools including bombs and steam generators, triggers and other gimmicks will help you deal with those trickier situations, sometimes. The amount of cash you need to access the later levels, get the top gear and then assault The Devil's Basilisk means you can't afford to chicken out, hang around or fail too often. 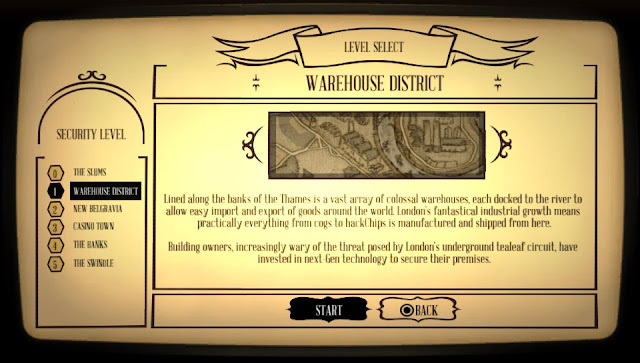 The swankier neigbourhoods you get to burgle, as time advances and your cash pile grows, put more more obstacles in the way like looked doors, bigger goons and nastier traps. The Warehouse District has a starker industrial setting while New Belgravia adds a splash of colour. Casinos and Banks really give you the chance to rake in the cash, but your final destination is The Swindle, taking down Robo-Holmes before it can be switched on.

However, The Swindle is let down by an all-too-Victorian stiltedness in the play, an unevenness in its progression that jars, and as for starting again once the 100 days are up, with nothing - that really hurts! Perhaps its the small size of the levels, but this in one procedural game that doesn't quite get it right.