on January 11, 2017
Danganronpa V3 is out in Japan today, see previous post to help kick the Vita off with limited editions for 2017. But, for now, Minecraft continues to rock it for the Vita in the first week sales this year. It sold another 32,000 and sticks to the top 4 of the chart, as the only Vita representative in the Media Create top 20.

Over the six weeks of the seasonal sales period in Japan, the Vita sold over 195,000 units, which might be why it is so scarce around the rest of the world, if Sony was stockpiling for its home market. Hopefully some stock for the west will free up in coming weeks, otherwise I guess we're never getting any more. 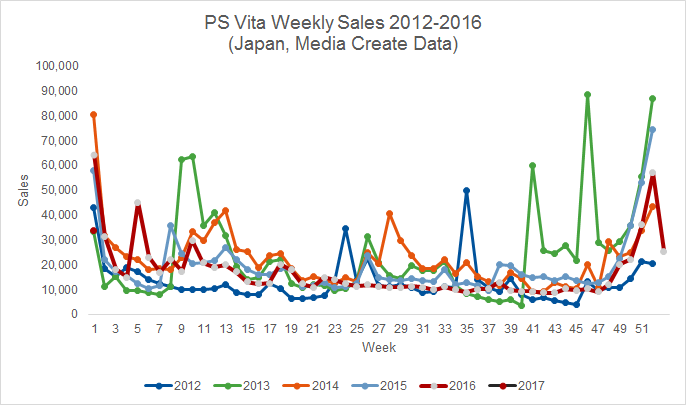 Accord to the hardware data, the Vita shifted 34,000 units in the first week back from the holidays. Note I've fixed the chart from last week, so the red dot on the left is now Week 1. Hopefully Danganronpa V3 will provide some good early momentum, with Valkyria Azure Revolution following on next week.
charts danganronpa v3 japan media create minecraft ps vita vita sales