on January 06, 2017
In most of my RPG reviews I mention a dislike for crashing through waves of level 1 rats, goblins, sprites and other annoyances, no matter how powerful you've become. 2015's Titan Souls (currently a PS+ game, hence the late review) does away with all that nonsense, leaving you with nothing but fiendish boss baddies to fight, armed with just a single arrow for your bow.

That's a compelling idea, but also one that has to be handled carefully, Titan Souls needs plenty of atmosphere and a world of intrigue to make the bits between the 19 battles anything other than glorified trudging. Fortunately, this mostly two-man effort pulls that off with panache. That said, this is a game you'll probably only play through once, so for now, at least, the price is right.

Outside the caverns, you can explore. But there's nothing to find beyond the doors to the caverns. You can only enjoy the pixel-gorgeous scenes and landscapes, there's no signposts to read, no hidden health potions or coins to collect, such is the sparse nature of the game. 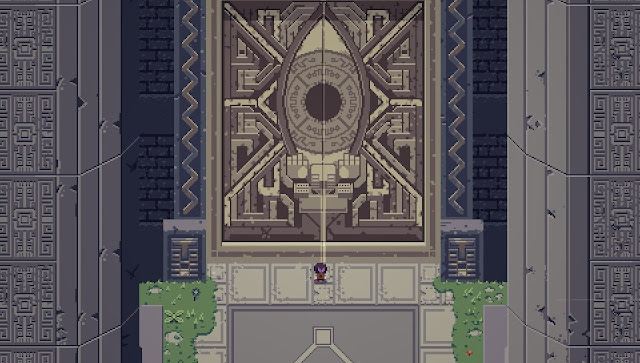 In a cavern you'll find the demons. Observe their movements or see what you can use in the room to help defeat them. Then start firing your arrow, running and rolling to avoid death, collect the arrow or pause to summon your bolt from across the room. Every battle can be over in a few seconds or take many minutes of replay as you figure out what to do, and then get that action exactly right.

Some beasts throw out gas, flames or other weaponry to complicate the scene, but delivering the killing blow is all you need to focus on. On the Vita, the shrinkage to a small screen does seem to increase the challenge, but otherwise its on a par with the big-screen versions.