on January 21, 2017
File under so late to the party, that the even the cleaners have left! I've had this as a physical release since launch, but apart from some quick blasts, have never really sat down and enjoyed it. I did just that over a quiet January weekend - reminded by the fact that 2013's Rayman Legends will be a Switch launch title - and boy is Origins fabulous. Well worth picking up for £5 in the latest PSN sale.

The story, as is, sees the lazy Ray-folk snoring so loudly that they wake up a grumpy witch who curses their glade. The fairy folk and Electoons are captured and must be set free. Cue much platform action, across flat open races, mountainous climbs, collapsing scenery with a spot of flying and swimming to round things out. 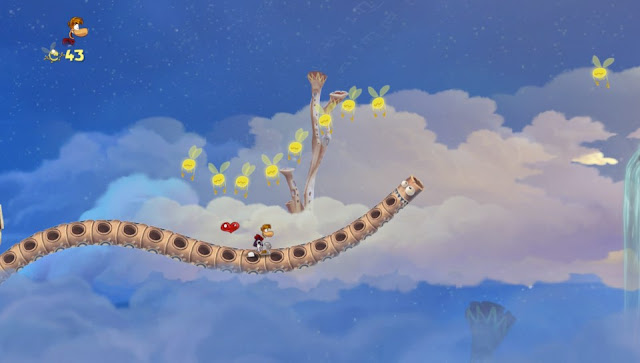 With their polygon obsession, it is easy for  developers to overlook the impact of some Each of the 60 level looks gorgeous, with spectacular interaction between creatures, scenery, helpful elements and many cunningly hidden secrets. Each level is short enough to not get bored of, and if you collect enough Electoons, you can scoot off, and venture back and forth. Each level also has a time trial mode to add a splash of extra challenge.

To add some extra spice, you can play as Globox or a couple of other Ray-folk, but the Vita version is single player only. In a nod to its then newness, there is a touchscreen pinch-and-zoom feature to zoom in and out on some of the 60-odd levels.

But its the manic platforming that's the heart of the game. A heart is a precious thing in Rayman, as it will save you from death if get tagged by a nasty, land on some spikes or fall into a beastie's lair. You can only have one at a time and learning where they are in tougher levels is a key to success. 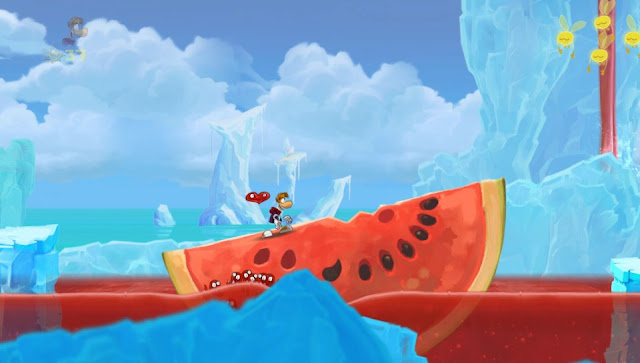 The game moves swiftly between world types, from the verdant Jibberish Jungles, dark and dingy caverns of the Grumbling Grottos where playing with the lights is essential for your survival to the icy fruit madness of Gourmand Land. Every new level has at least one delightful moment, and you can go back again and again to find new things, or Electoon prisons you missed and find new tricks that impress.

If you ever get bored of the latest whizzy shooter, or feel that gaming in general is depressing you, Rayman is one of those cheery titles that can make you fall in love with the whole scene again.

Having gone way back for this review it looks like a game that could be released today and be rapturously received, so if you've never played either Vita title - go and grab them. Hopefully Ubisoft will revisit the series properly one day and provide a new adventure.