on January 21, 2017
I've never really gotten into one of these Musou whack-a-mole games with meaningless combo counters and endless cookie-cutter monsters being put to the sword by practitioners of over-the-top moves. However, Fate/Extella could be the game that changes my opinion. The latest in the Fate series, it sees the saga depart from visual novels and card games, into combat mode as a huge comet trashes a planet, leaving behind giant shadows to feast on the natives.

With the survivors' minds wedded to some AI virtual construct, the Moon Cell, it all goes a bit digital. In this realm, you can summon legendary warriors, borrowed imaginatively from many histories and literature, as powerful servants to fight off the shadows and their minions, as well as some other upstarts, who have an eye on the binary landscapes recreated inside. 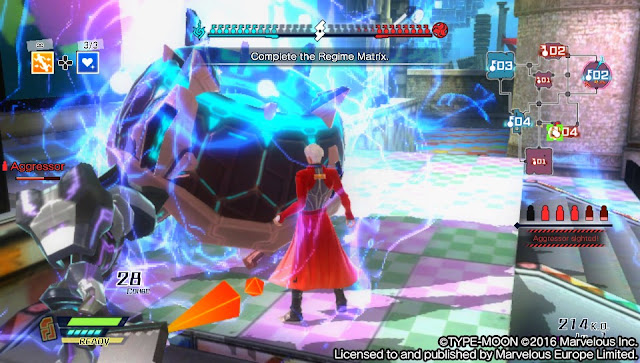 Due to some wonky firmware update within the Moon Cell, there's chaos on both sides, ultimately it boils down to a game of conquest. You need to battle through area after area of minions, claiming sections for your own, trashing the slightly more powerful aggressors before beating down an end-of-level overlord.


Battle of the Fates

Helping you out are a range of sword wielders (saber class), bow men (archer class) and pike prodders (lancer class), plus assassins, riders and a few more to act as your servants in battle. You can also get upgrades in the form of Mystic Codes, which are collections of skills triggered by the direction keys, Bonds with other characters that provide powerful skills and a range of personal power-ups for your character.

There's a lot of them to go around, but in most cases its hard to feel them making a massive difference. Noble Phantasms are the big finishing moves and while splashy and destructive, only really help clear out an EOL. 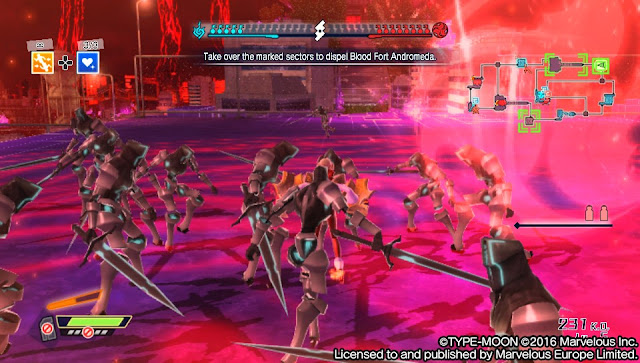 The first thing that impresses in Fate Extella is the smoothness and fluid visuals, the game plays at a constant pace regardless of how many low-poly moles there are on-screen, bolstered by plenty of flash effects, presumably to hide the lack of detail, but it does make things seem impressive. While its not as shiny as the PS4 version, it really does look good with a fair degree of background detail.

Aerial enemies see you leaping about the battlefield like a demented grasshopper, trying to swat them down while arrows handily point out the direction of the major foes, not that you can see much in the middle of a major dust-up, with blur and wobbly effects aplenty.

To bulk things out further are side quests, the same battles with some random objectives thrown in and free battle which is exactly the same, with the only objective being to boost your score or ranking.

At this point you realise there really isn't much depth to the main game, and the roster of annoying characters (including a squealing Idol of all things) show just how hard it is for most Japanese developers to think outside their little cubicles. The random lovey-dovey scenes make me want to delete the game there and then, 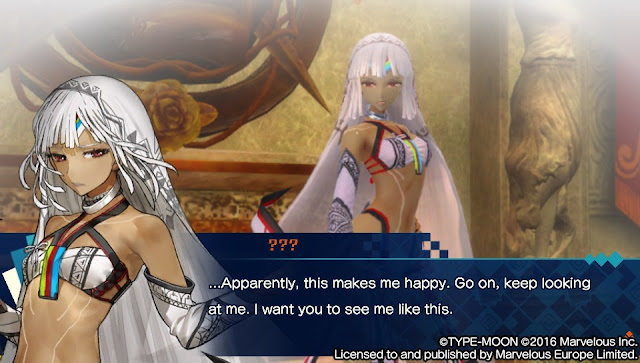 The gameplay is fun for a couple of hours, but you can soon lose faith and the will to live through the barmy plot. And then, once you've admired the latest new character moves, you go back to the same couple of moves that seem to work, while working around in a tight circle to thrash the enemies. The harder game modes don't make it any more fun, they just mean more hitting needs to be done faster, which is challenging, but oh so boring after a few failures.

While the game is a fast-paced technical marvel, neither the story nor the game mechanics really do anything to support all the flashy visuals. The battles rapidly get too long to be any fun and,