on December 21, 2016
On the back of the decent launch of SaGa Scarlet Grace plus seasonal sales, the Vita shifted over 36,000 units in Japan over the week. A good final week could see it pass through 800,000 on the year - according to Media Create sales data. That would be 20% down on last year's million, but still makes the Vita far from a dead format in its homeland.

A rough currency check is about $120m in revenue, for what must be a pretty low-cost production line. That's a good business for most companies, assuming Sony still produces the ARM-based Cortex-A9 and SGX543MP4+ GPU chip, and can keep partners turning out the other now-pretty-old components for the system.

On the software front, Square's SS Grace sold 65,000 on launch, landing at No.4, even with its supposedly high difficulty factor. Minecraft grabbed a seasonal boost and shifted 20,000 on the week to stay in the top 10. That brings it ever-closer to a million boxed copy sales.

Akiba's Beat on PS4 failed to make the top 20, which is bad news. Hopefully any issues will be fixed come next year's Vita launch (I'd hope so, as its one of my "Five games to love in 2017"), if Acquire can be bothered. I guess they have to focus on Vita now to recoup development costs, but be prepared to chalk up another cancelled game, just in case.

Last week's chart data saw a modest boost with the new colour models, place your bets on what next week's number will be. 30K, 40K, 50K or 60K+? 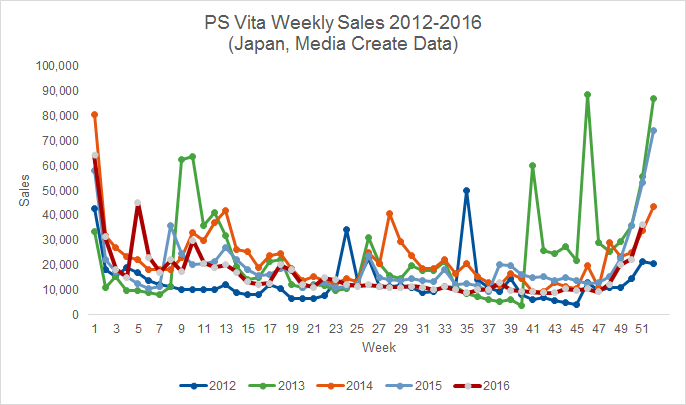