Review Slain, Back From Hell

on December 08, 2016
Slain should be my perfect game. It blows my ears with a doom-laden, epic and at times subtle, metal soundtrack. Its visuals are pixel-retro brilliance, yet laden with effects and drenched in blood, and the gameplay is decidedly 16-bit.

After an abortive launch, the uprated edition, Back From Hell, is now on the Vita, and patched to fix an annoying bug. It is a most visually and sonically impressive beast. As Bathoryn, a warrior raised from the dead to fight evil (yet, again - poor chap, no wonder he's a touch gloomy) you wade into battle, knee deep in blood, hacking away at skeletons, flying ghosts, thorny bushes and larger demons.

Aside from the sound, the first thing that hits you in Slain is the weather, it has the best climate since Skyrim. There's gales, fog, mist, rain and thunder all slapping you in the face or obscuring the view with some cool pixel blurring and whispy lighting. Although this is an undead, and depressed world, there is hints of movement and life everywhere. 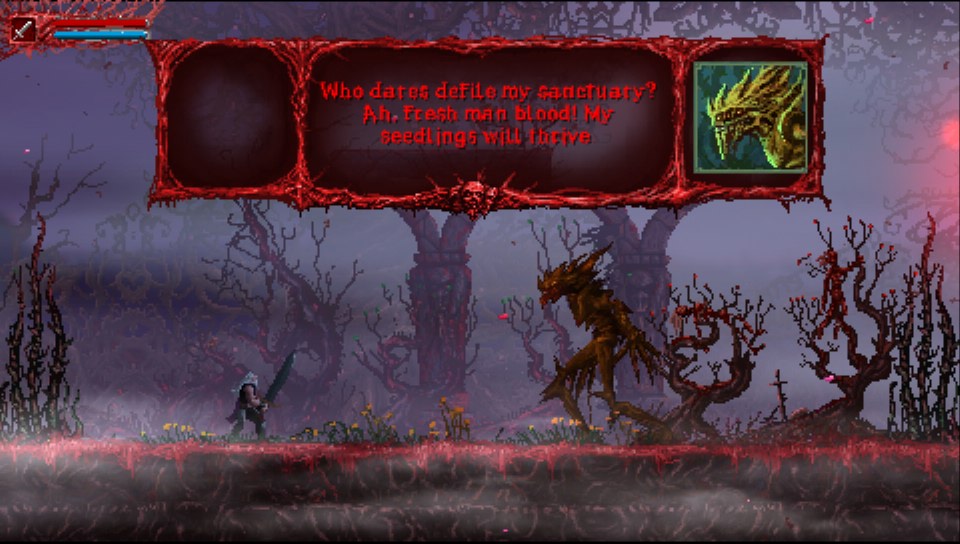 With some light platforming, the key is really on the fighting. While you can wipe out the footsoldier minions with little consideration, any bigger battle takes finicky timing and a lot of luck to be successful. Are you supposed to dodge, parry, use magic, retreat or go all in with sword whirring? Learning how to take down bosses takes time and effort, andlots of annoying backtracking.

Once you clear the first level, you can at least pick a couple of routes through the game, through witch-infested highlands or the murky Wolfwoods, but its the same battling wherever you go. And, as for all the no-damage trophies? Really, I have no idea how some of those are achieveable without an insane level of commitment? 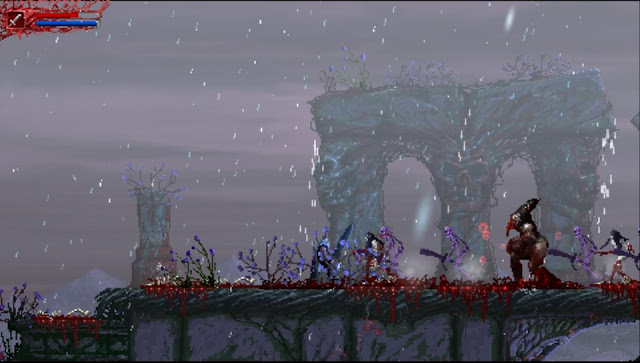 Magic spells and brutal attacks can help you win battles, and help win back some much needed mana, while continue points litter the landscape. But, even these seem misplaced or positioned more to annoy you. And, just one missed jump and back you go a few painful steps! I keep looking for secrets everywhere, only to find the odd less-than-secret bone; waiting for a special move or power-up, only to be left with more simple sword swinging.

The engine created by Wolf Brew is fantastic, and could be used for some great retro games, if the dev keeps going, but the core mechanics of blocking and then laying waste to your enemies feels clumsy and gets very samey after a few levels, with the difficulty meaning you can spend ages just rying to figure out the right pattern to defeat one beast. Just a little variety or flexibility would have helped immensely.