on December 08, 2016
Like these zombie TV series and movies, there's a stream of fun, quick, enjoyable to play games lurching on to the Vita from publisher SPL. KillallZombies is a speedy, violent, upgrade-packed arena shooter that sees your anonymous character surrounded by the undead, with the simple challenge of surviving as long as possible.

This can be done in either Arena mode or Vault Defence where you get to protect the last survivors, but mostly its just about staying alive. Pick a weapon and run around, searching for upgrades to save your bacon. There's a melee attack, but basically if you get surrounded, then you're zombie Pâté. Still, even in death, some power-ups give you the chance to do massive damage or score big points, so its all fun. 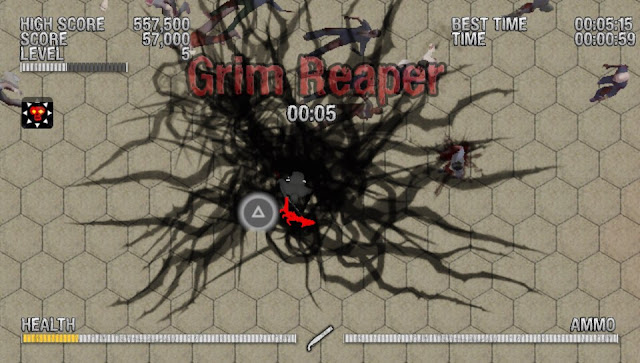 The Vita version of the BeatShapers PC original has lost a chunk of the graphical detail, arriving a couple of years after the PS4 version. Even so, the core fun factor of the game is still there. The view is a lot closer in, and moved to overhead, and there are a lot less zombies out there, but once you have a big gun in your hands, with some big end-of-wave beasts to try and take down, that doesn't really matter. It is harder to take down the bosses, and lots of little things seem off compared to the big screen version. 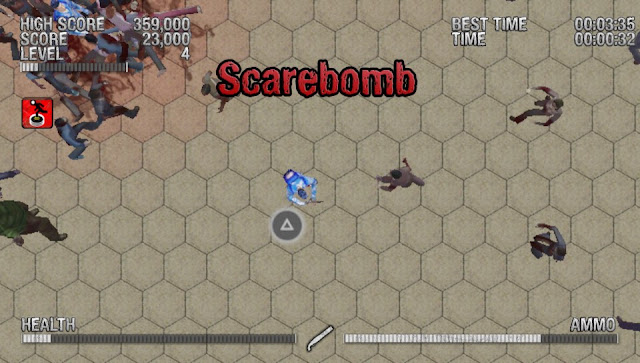 Shipping crates fall from the sky to squash zombies and provide power ups, while the grid can deform and provide obstacles. Useful defences, or other random extras that add a little spice to the game. Perks can range from flare guns to air strikes, clones and all sorts of randomness that may raise a smile or a grimmace, if you're in a tight spot.

With online scoreboards to compare against friends, this is about as casual-hardcore as gaming gets with intense bouts of survival, but it is barely worthy of the original's name. The waves aren't really waves, and the trophies are hardly worth the effort, but if you want some mindless shooting, this is good cheap fun with a great soundtrack.

If you want a slightly more tactical zombie game, then OMGZombies from a few years back is still on PSN.