on November 22, 2016
Ahhh, old school, there you are - we've been expecting you. Annoying respawning enemies, minimal health and gear, a map that doesn't really help and a procession of running back and forth. Yet, yet, Exile's End is bizarrely pure, removing most of modern gaming's trappings, making it pretty challenging and rather clever. So don't dismiss it, just because there isn't an item crate every five paces and big arrows saying "go here."

Exile's End features graphics, tunes and design by a few Japanese design legends, with Magnetic Realms at the helm, but to be honest they could come from the pen or keyboard of any smart indie. However, it does feel authentically old-school, and I keep longing to dash off and play a spot of Turrican or Another World. 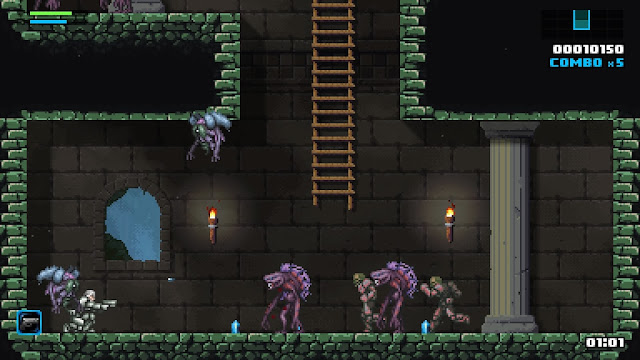 Its another, you've crashed on a planet, get us out of here sci-fi games, with minimal plot, no excessive chit-chat and a world full of unfriendly wildlife, and then unfriendly people to take on. You stumble around the first area, finding a few rocks to lob at the lurking worms. then your suit starts powering up so you can survive more than a trip, and at last pick up a gun and can start dealing proper death.

Soon double jumps, grenades, gravity guns and other goodies come your way, but the perils increase with slavering monsters, radiation zones, the old chestnut of collapsing platforms and more. Each time you move between a level, you need to check what you're packing, no good going into a gun fight with a rock, or wasting a precious grenade, so careful thought is always required. There are some secrets to find, but they are damn hard to spot, as you dive deeper into mines, churches and beyond.

Yes, the game is pretty compact and short, but that's better than so many games that drag out for days. Yes, its not perfect, a few animations here and there stilt your progress, and the enemies are dumber than dumb (and how hard is it to crush a worm under foot?) But for a portable game, Exile's End is pretty much perfect, with fast restarts in the room before you died and a smart line in tech for you to play with.