on September 20, 2016
Boy, this is not an easy game to love. It won't let you take screenshots (these are provided press shots), it disables the WiFi for no good reason, all the trophies are hidden, and it populates an interesting world with a cod lineup of detective characters out of the worst teen pulp fictions.

They are all here, the grizzled, wrinkled old cop. The angry youngster with the purple tie, sexy lady boffin and anally retentive smart arse Inspector, and you - the new kid on the block. Given most Japanese rooms are tiny, its a miracle they can all fit in most crime scenes! 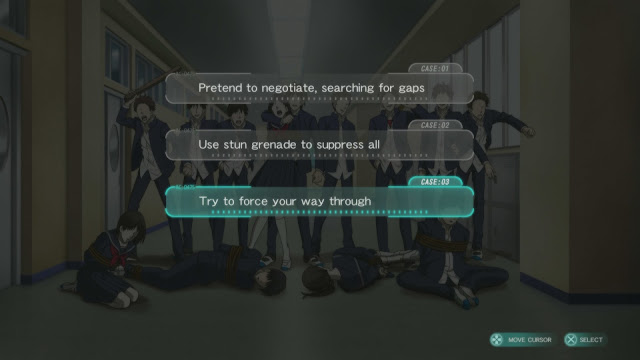 The world lies somewhere between the futures depicted by Demolition Man, Minority Report and Logan's Run. Set 100 years in the future, people live well, monitored by intensive security cameras and their own personal Psycho Pass, yet still wearing cheap suits and ties.

If someone leans toward imbalance, criminal thoughts or antisocial tendencies, they can take medicine to curb those traits, or will soon face a visit from the Enforcers, who hunt down those that stray on the wrong side of the tracks.


Pain in the Psycho Pass

As a visual novel, based on a recent anime series, you're a new Inspector in PSB Division 1, forced to make multi-choice decisions to help guide the story. Go here, do this, talk to so and so. It'd be amazing, if your partners were in the slightest bit interesting, but they aren't - while managing to be largely incredibly annoying to converse with. Also, if you're the rookie - why are you making all the decisions? 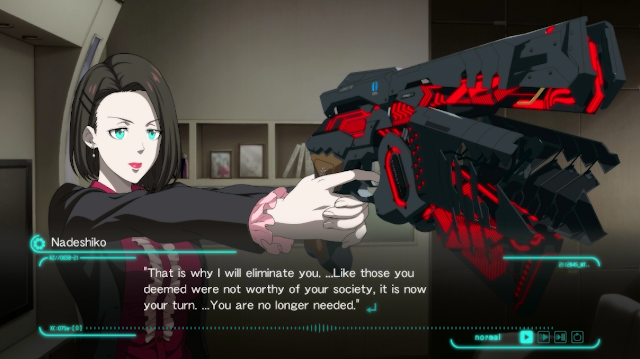 You're fighting against a mystery puppet master who is using the invasive technology behind Psycho Pass to control other people to do their bidding. Using the drugs to create terrorist incidents things soon spiral out of control.

As ill-befitting such a society, blowing people's heads or legs off seems a really random way of sorting out the criminal class, but that's what several scenes boil down to. There's also the usual interpersonal dramas, the odd bit of social time and other personal choices to make. Do you take the medicine to keep your own Psycho Pass readings in check, or abandon them and see how it goes? 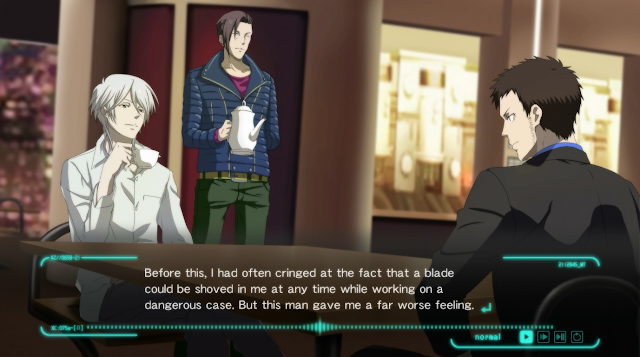 The story itself is vaguely interesting but let down by bad mixes of art and narrative. A crowded hospital corridor it says - while we look at a picture of an empty hall. A massive fight erupts, yet after none of the characters have a mark on them! And so on, it all contributes to breaking any grip the game may have on the audience.

You play again and again, trying to find the right routes, avoiding the bad endings and trying to dive deeper into the mystery, but its not a patch on Steins Gate in terms of plot, charm or execution. Even with cunning use of saves, its a long slog through Psycho Pass and the prose just doesn't keep me interested.