on September 19, 2016
Two physical retail games out in Britain in a week? Madness I say, but the techno-thrilling visual novel Psycho Pass (review in progress) manages to beat RPG MeiQ, probably by about 100 sales to 75, judging by how Sony perceives the market. Kudos to NISA and Idea Factory for keeping them coming.

Amazon's PS Vita Best Sellers list is a bit more random with pre-orders of World of Final Fantasy beating out Need for Speed (for £9.50) at the top of the list in the UK. God Eater sticks at No. 3 while Sonic's racer is at No. 6 - seriously developers, Vita owners want a good racing game! 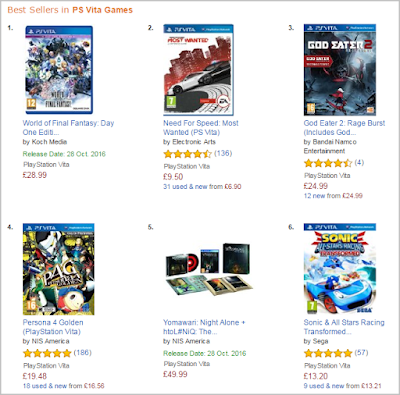