on March 29, 2016
Filed under the 'from out of nowhere' Vita releases came Tachyon Project, a port of a PS4, Xbox One and PC twin-stick shooter from Eclipse Games. Compare it to the Xbox version trailer and clearly the visuals have had a bit of reality check to make for a smooth experience on the Vita, but even then this game wasn't quite as polished as Geometry Wars or Resogun.

With a thin cyber plot behind it, your ADA hacking tool breaks into systems and shoots the crap out of the local defensive tools. Of which there are many, with a range of movement patterns and functions. Suitably low-tech cut scenes bookend the game's chapters, rushing the plot along.

Across some 60 levels you need speed of thought and action to fight them off, using a range of power-ups and weaponry. The more you shoot, the more time you get, some levels you need to survive long enough, others require you to shoot "x" types of enemy, but if you run out of time, it is game over. 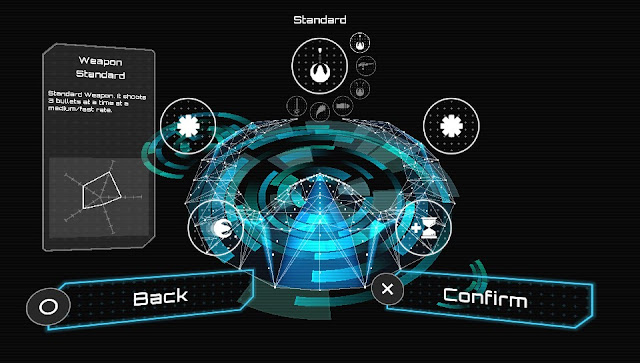 While the Vita version has lost its bigger brother's multiplayer modes, there's still a few Challenge modes to overcome and you can compare your highest level scores against the rest of the Vita owning community. In play, the good old wall flower technique is still pretty useful in most cases, but when that fails you need to be in the zone to survive. Do note that constant firing pushes ADA back slightly, so there's a slight benefit to not going berserk all the time.

While some of the gloss has gone, losing a lot of lighting and the hexagonal backgrounds, Tachyon Project maintains much of the fluidity a game like this needs, with only the odd bit of slowdown and quite a few jaggies.

There's some, hopefully deliberate, slowdown at the end of each level, and there's a couple of the "best of Euro dance" soundtracks that seem to deliberately change tempo to screw with you, if that's not the case - then there's quite a bit of work still needs doing. 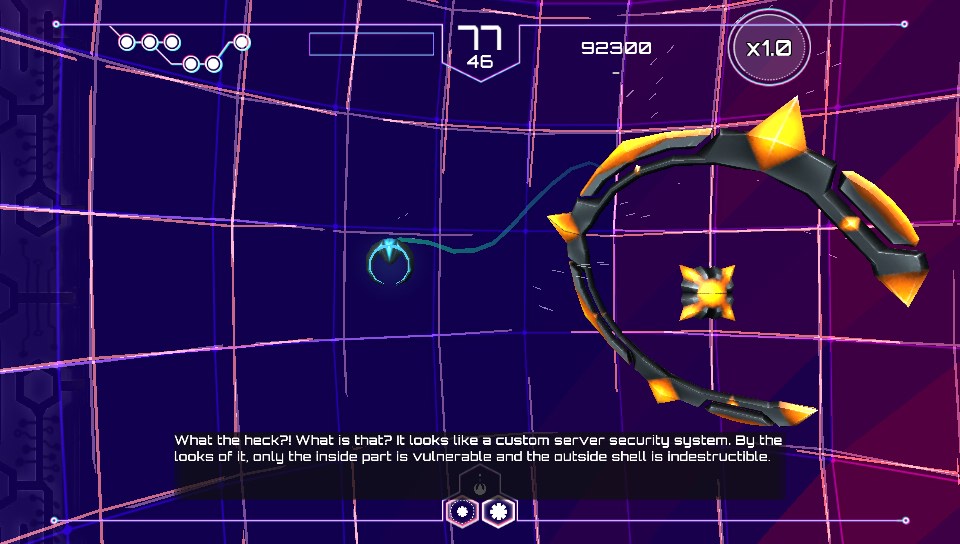 The graphics do have a slightly rudimentary feel to them, but Tachyon Project still has pace and challenge to make it another of the Vita's cool little arcade games. The only real concern is that it now doesn't look or feel like a £7.99 game (Cross Buy price with the PS4 version), still on Steam (£6.99) and Xbox (£7.99), we aren't being gazumped for once. Look forward to trying the big screen version, someday.


So, yes this is a fun shooter, with a few hardy end-of-level bosses, but having lost the gloss, it doesn't feel quite as much of an experience. Perhaps if Eclipse had gone even more retro with the feel (more like the pixel-and-curves front-end) it could have come up with more original presentation, but that takes it beyond a port and the team is working on new, cool, games that should also hit the Vita.

The more pressing concern is the Vita already has a great line up of shooters and this doesn't quite make it into my top 10, so it may have trouble finding an audience. But in between those massive RPGs we all enjoy it does have a place as a tricky moment of shooter bliss.