on December 16, 2015
Nothing can stop the Nintendo party at the top of the Japanese Media Create hardware and software charts. But the Vita is best of the rest with Valkyrie Drive and Steins Gate 0 neck and neck at Nos. 5 and 6, with 39.000 sales each - Steins was just ahead of the PS4 edition. Oh, and Gravity Rush Remastered only sold 25K, so that was worth it.

Throw in the PS3 version and Steins Gate 0 sold over 85,000. Lower down the chart, Idol Master Red/Blue manged 23,000 sales at No. 12. Legend of Heroes Trails in the Sky SC Evolution creeps in at 15 with 15,000 sales ahead of the news of a third official title in the series.

Vita hardware zooms up to 35,900 thanks to seasonal sales, the third best week for the Vita and PS TV this year. Expect a couple more good weeks before the end of the year. If sales go bananas then Vita could creep over a million in Japan for 2015 to match the previous two years of a million plus. Then it will be straight back down into the doldrums until Dragon Quest Builders arrives. 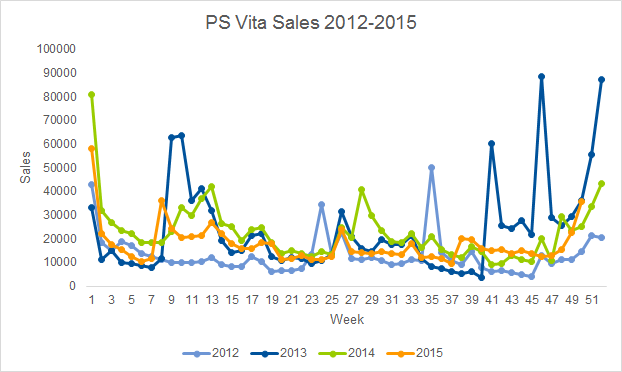