on October 16, 2015
Nintendo has shaved a hefty chunk off the price of a Nintendo 2DS, and lots of other products in the home entertainment sector will start seeing cuts as the holiday sales season looms. It can now be found for £80 plus a game.

UPDATE: Looks like the PS4 price drop is filtering in, no word on anything Vita. 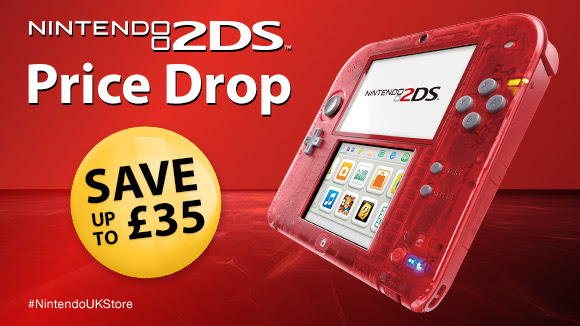 I suspect that makes no difference to Sony, they apparently sell so few PS Vita consoles that it makes little difference at what price they retail for. So far, Sony has shown no interest apart from one minor bundle in promoting the Vita this year in the UK, so why cut the price.

There's the new colour blue model in the States, but that too seems half-arsed minimal promotion. Still, a price cut would give the media something to talk about, would make the Vita look more attractive on the few shelves it is still sold from and remind the world that Sony still cares.

Of course Sony could offer a price cut, and screw it up at the same time. If it announces a cut at the same time as it drops the PS4 price, which has had a trim in Japan and the US, the PS4 cut will grab all the news.
Nintendo 2ds price cut ps vita sony