Vita sales in Japan waiting for the big bump

on September 16, 2015
In the last quiet week before a bunch of new Vita games hit the shelves, hardware sales are naturally down on the Media Create charts, at 9,480 units. However, the worrying trend is that Vita sales are now half those of the PS4, and the trend gap has been growing rapidly in recent weeks.

On the software side, Minecraft remains firmly in the top 10, selling another 7,400. Things should be more lively next week, with Resident Evil Revelations 2 and Samurai Warriors kicking into the chart. 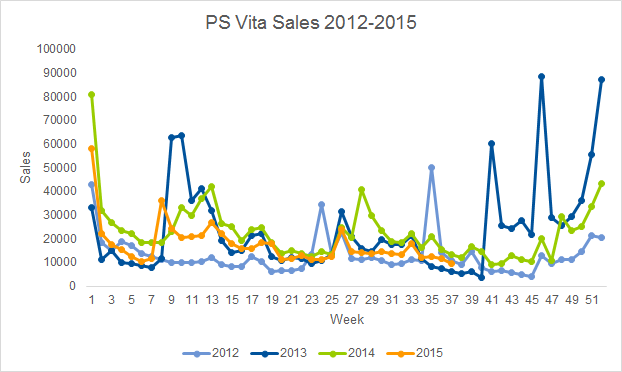 On the plus side, as seen in the graph, sales usually pick up over the next few weeks to the end of the year. There's also all the good news from TGS, suggesting the Vita should have enough legs to keep going through 2016, which could encourage adoption.

Also, the arrival of the unofficial DekaVita gadget could help boost Vita TV sales - currently around 500 a week.