on September 07, 2015
Looking back into the crazy world of the psychos, schizos and over-ego-inflated freaks that inhabited Hopes Peak. Do I really want to go back there?

Well, since this is a first person shooter adventure based around that whack-job universe, set between the two lead games, I guess - why not?

Note, Danganronpa is another of the recent games that eats Vita power like no one's business, and you can't launch other apps like Trophies while it is running. But, at least designed exclusively for the Vita, it should put up a good show. 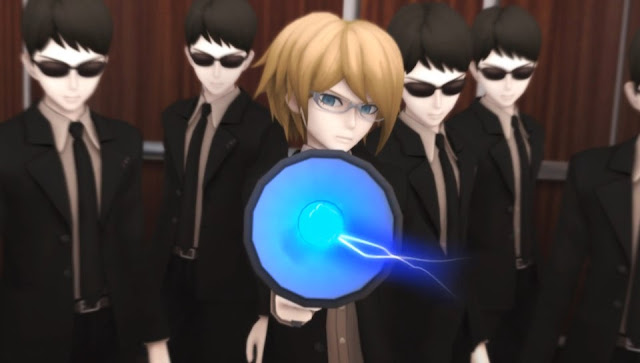 Heading into Another Episode, it will help if you've at least played and preferably finished Danganronpa 1 and 2. There are some fairly major spoilers throughout, as well as a lot of characters you'll get familiar with.

AE begins with a girl, Komaru Naegi, locked in a hotel room, for longer than the usual weekend getaway. The sister of Matoko from the first Danganronpa, she's just an unwitting hostage, and soon exposed to the crazed world of Monokuma bears, an assault army of cuddles, bombs and claws.

She's trapped on an island, Towa City, and will soon find all avenues of escape cut off. Toko Fukawa, a right loony-toon, schizophrenic writer and blade wielder from Danganronpa soon makes an appearance as your guide and on/off buddy. Between them they have a weaponised loudhailer and some sharp scissors to deal with the many enemies, and tricks and traps the game puts between them and escape. 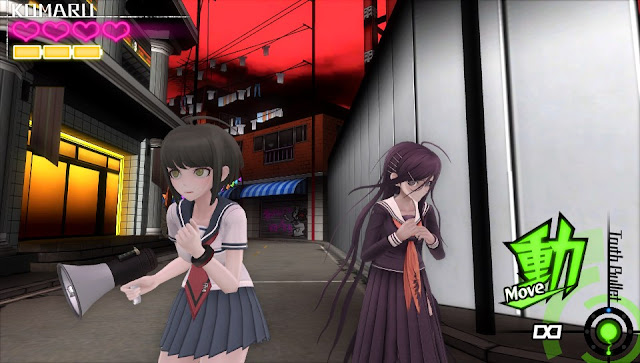 It soon transpires that the bears are only half the problem, a gang of kids with a prodigiously overdeveloped sense of entitlement are in "charge". With mass murder of adults high on the agenda. AE breaks your progress down into small exploring/FPS sections, the odd Monokuma based puzzle and a lot of exposition.

It can take Toko about 5 minutes to explain why she's angry about another person being right/wrong/happy/sad - so expect plenty of text skipping, unless you really want to get into character as a psycho slasher. Also 'helping' are some rival technology firms who may or may not be deeply involved with the crisis.

Unfortunately the shooter element really isn't that hot, and while the loudhailer's modes and variety of different Monokumas (shielded, bomb throwing, rolling, nightmare) make for a few simple but fun battle challenges, this shouldn't really be billed as a shooter. Some loudhailer modes are more strategic, with Detect helping you find clues, and Link giving you control of Monokumas, but both are woefully underused. 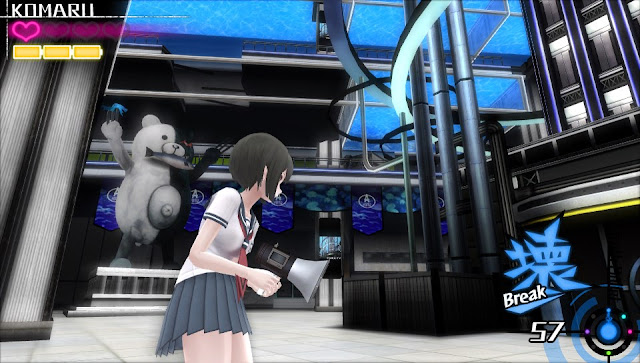 The puzzles are a little more entertaining, but literally just a few seconds of diversion per level, as you try to wipe out a Monokuma horde in the most efficient one-shot or one-trick manner. Bonuses await those who can be bothered to ace every one.

To expand on this simple gameplay, there are some experience points up for grabs that allow a range of skills to be used. Some help like autolock, but this needs to be turned off when you need to fight Monokumas in a specific order, otherwise it never focuses on the right one. Others increase healing, add to HP or lives, but there's nothing like a proper RPG's progression system.

Along the way, the girls find plenty of reading material. from manga to hand-written death notes by the many victims littering each level. The crazy mixed-up kids at the heart of the drama also tell their stories, and while it hints at the earlier games, especially with the end of level battles, it all feels pretty tame, expect for Toko's end of level fantasies. And the horrible scrawls toward the game's climax. 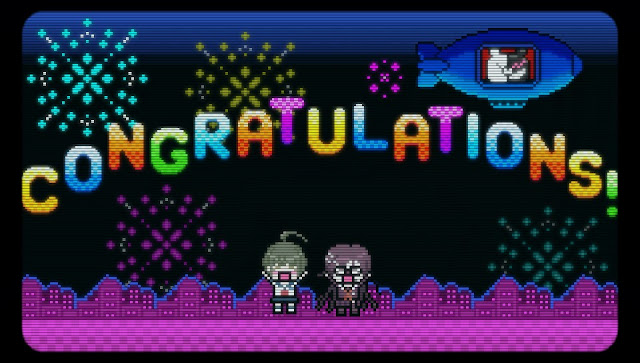 As mentioned, this game seems to use a lot of the Vita's power, and while the mix of plot-twisting cut scenes and action is impressive, there's nothing really stand-out 'wow' in terms of effects, with simple, small, chunks of level design. Some cool pixel effects pop up along the way, but this isn't a Vita powerhouse title.

The end goes on forever, and doesn't really help endear itself to anyone playing it for the trophies, but if you want to learn about the bonds of friendship, there's probably a lesson or two in there. Trophy whores can play it again for completion's sake, but I don't see how it can be a pleasurable experience.