on August 05, 2015
Marvelous' IA/VT Colorful music game shifts 38,000 units on its Japanese debut in the Media Create chart, to make it into the top three.


Looking a little further down the chart, dodgy-sounding love adventure Date-A-Live Twin Edition: Rio Reincarnation from Compile Heart ships 13K to get in at No. 6.

Alas, Bandai's next big hope, Ray Gigant, the Experience-developed RPG managed to sell a woeful 8,600. That's pretty shocking, especially considering the effort that went into the visual upgrade over traditional RPGs, perhaps that was the problem. Also, haven't seen any review scores yet, so it might pick up.

UPDATE: Famitsu reckons it sold closer to 10K, but still only sold 40%-60% of shipped copies, which is still pretty dismal.

On the plus side, that could hurry up a western release as Bandai tries to make its money back. None of that action, plus a bunch of other games hitting the charts helped the Vita shift units, with sales diving again. It is staying consistently behind the PS4 now, with no new PS4 games in the chart.

Looks like Sony needs a new upgrade or some new franchises to help sell the numbers that 3DS games can manage at the top of the chart. 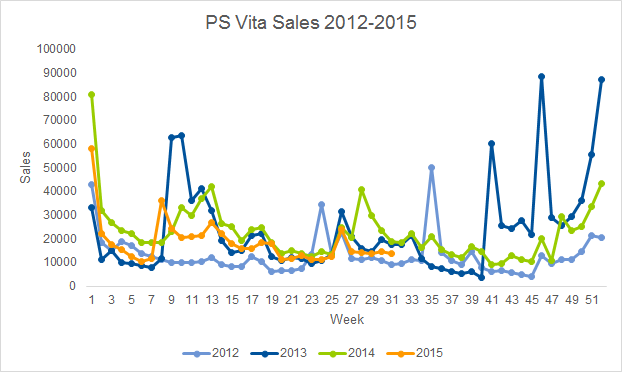