on June 03, 2015
If you've been reading this blog for a while, you know how much I've been looking forward to wading into Steins;Gate. Which might sound odd, given I know next to nothing about the original story. So, to prepare for the review, I've had a few episodes on Netflix playing in the background, enough that I get the big idea, without catching too much of the detail.

I'd been wondering what the significance of gel-bananas, bits of very old technology (pagers, really?) and some very strange people are. Now I'm playing Steins;Gate, I find myself buried in an odd, but strangely fascinating story of time travelling text messages, possible psychosis, advanced physics explained for dummies, and typical Japanese teenagers and post-teens. Its a shame the protagonist, Rintarou Okabe, starts out as a bit of a dick, but the story is the main driving force here. 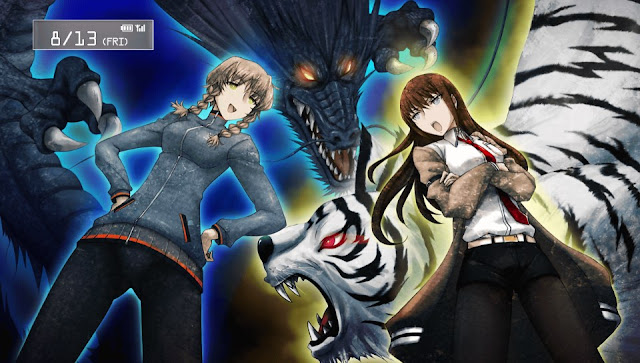 For a game where for most of the time, you just press a button or tap the screen to advance the story, it is pretty compelling stuff. Listening to the Japanese voices and reading the subtitles isn't the most natural way to enjoy something, but I guess plenty Vita owners are used to it. The artwork is crisp and mildly animated, with a few motion effects, and the odd cut-scene for dramatic effect. The backgrounds seem mostly a little muted, but they set the scene neatly.

You do get to interact with people via your less-than-smart phone, with calls and emails, choosing from a few options as a reply. These choices can bend the story subtly or rip it to pieces with a whole new timeline, but I've no idea how long it would take to see all the angles and options. If you're after deeper interactivity, beyond the few main paths the game can take you down, or choices and puzzles like Virtue's Last Reward, then Steins;Gate may not be the game for you.

That tappity progress can make the visual novel drag, if you've got even mild attention deficit issues. Stick with it though, as things don't really kick off until the later chapters, when it becomes an emotional roller coaster, the decisions get ever tougher and your anxiety levels rocket. Beyond that, every twist, character exposé and shocking revelation stabs like a knife, sometimes literally!

One niggle, when watching a movie, I tend to ignore the critical thinking from my brain, just going along for the ride. However, the static pages of a visual novel aren't as popcorn-stuffingly dramatic. So, my mind is still paying attention. This makes it easy to spot annoying flaws or questions that detract from the experience. So, why are the programmer's 'bloodshot eyes' perfectly clear when he appears on-screen? Why is this seventeen year old allowed to act like she's four without getting a good pummelling? Why does no one ever change their clothes? They're minor annoyances, and you'll probably find your own when playing. 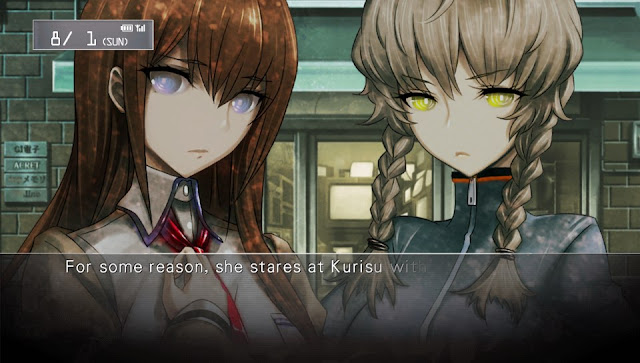 But, back to the plot. Set in and around Akihabara, (you know, that place made famous by Akiba's Trip!) Steins;Gate throws together some of the deeper science that could lead to developments in time travel and comes up with a magic microwave as a rather ad hoc solution. That, a crashed (or not crashed, since we're in split timelines) 'satellite' and some junior boffins who know way too much about Stephen Hawking level stuff and conspiracy theory provides the quantum spaghetti for the story.

Fortunately, Steins;Gate has the good grace to add lots of chit chat about food, toys, pop culture and teenage obsession with boobs to keep things grounded. The characters are suitably quirky, mostly annoying (for me), but they help the plot keep moving. I won't spoil the major parts of the plot, but silly things at the start become major issues later on, so paying attention is key. Naturally, everyone wants a go on the time machine, and things soon spiral out of control.

The only annoyance is when there's some of the more banal chit-chat going on, and you want to rush through it, you never know if you might miss something good. As the chapters advance, there's death, gruesome revelations and plenty of twists and turns. This makes the phone interaction seem rather lacking, you want to fight and scream at people, not just text them!

Quite why this isn't a movie, starring some of Hollywood's bright young talent, I have no idea. Way more novel than game, it does get pretty intense and you can be tapping the buttons faster to try and move things along. 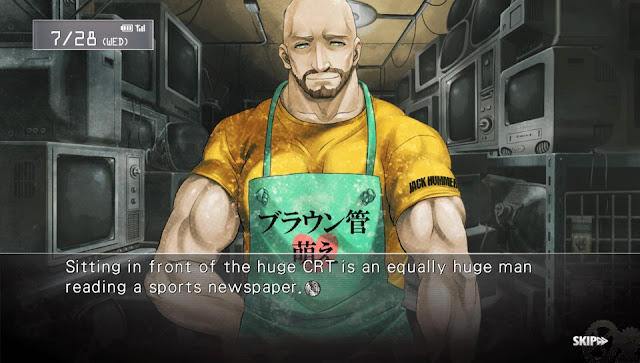 There are some odd things in the package, 48 save slots for a linear game? Are micro-managing perfectionists going to save at every possible junction? I guess it saves going through the full novel many times. That said, when you get to one ending (I got Irreversible Reboot, first time round, Stardust Sky second), the temptation to leap straight back in to crack the others is pretty strong.

The journey really ties you into the characters, and their misfortunes later in the game can hit you really hard, making this a surprisingly soulful and emotional tale, with some staggering plot twists.

Still, surely it would be easier to have previous sections and timelines open up for instant replay? Perhaps using the string metaphor that's shown in the game, that'd make a cool mapping system! That'd also be more useful if you forgot something or missed one of the fairly random trophies. There is a back log to review the script, but that's not ideal. Still, as mentioned, we're here for the plot and I love it, hope you do too!