on April 23, 2015
Some of the folks from Studio Liverpool (aka the WipEout team) became R8 Studios, and they've finally got their Kickstarter campaign going for the futuristic racer, Formula Fusion. A Vita version is way down the list of stretch goals at £400,000, but at least its there and if the new game can tap into the many WipEout loyalists, then its in with a shout. Then again, with X1 and PS4 versions at £350K, the Vita isn't that far off.

UPDATE: There's been a right fuss online about the low first funding goal, to which the team has responded and the confusing stretch goals, which they've clarified in the KS comments. Regardless, the game has passed £23K in a few days, hopefully it will approach the console goals by deadline.

FURTHER UPDATE: What a shambles, the game's KS page now has more sub-clauses than a legal contract. The console goal has dropped to £100K, leaving the Vita in the lurch at 400K - not going to happen! Whatever concept R8 had about their Kickstarter, no one should EVER repeat this botched effort - look at Yooka Laylee to see how its done! Although, despite that one raking in the cash there's no sign of a Vita stretch! 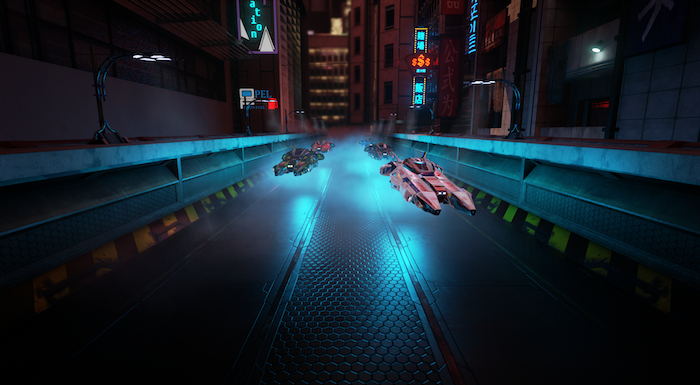 While they, naturally enough, claim it is very different to WipEout, we still have anti-grav racing in a set of cool city tracks with a lusty techno soundtrack and visuals from Designer's Republic. There's also plenty of pledge levels and cool trinkets to make it worth investing. Check out the page here. If it does get funded, this could easily be the biggest Vita game of 2016! It would just have been a hell of a lot easier if Sony hadn't broken up a proven successful studio!

The addition of eSports mode might be a bit much for the Vita version, but since I still happily play WipEout multiplayer, as long as there's something for us to enjoy, that'd be cool.
formula fusion kickstarter ps vita r8 games sony stretch goal WipeOut yooka laylee