on April 01, 2015
This week's media create chart is full of good news for the Vita, in a mad week with the first 13 games all being new entries. The Vita's best showing is Sword Art Online Lost Song selling 139K, One Piece Pirate Warriors 3 only 53K, Pro Yakyuu Spirit Baseball 2015 and Senran Kagura Estival Versus doing around 45K each at retail. Minecraft has a fine second week as a boxed product.

Threatrhythm Dragon Quest is the only 3DS game in a rare twist, but according to this teaser site, the Vita might be getting a Dragon Quest Heroes sequel soon.

We already knew Senran had sold over 100K, according to the company including digital sales, so the real question was how much hardware could Sony shift in response. That answer is only 27,000 units which while still pretty good in the state of the market, suggest Sony can't rely on these serial games to drive sales in future. 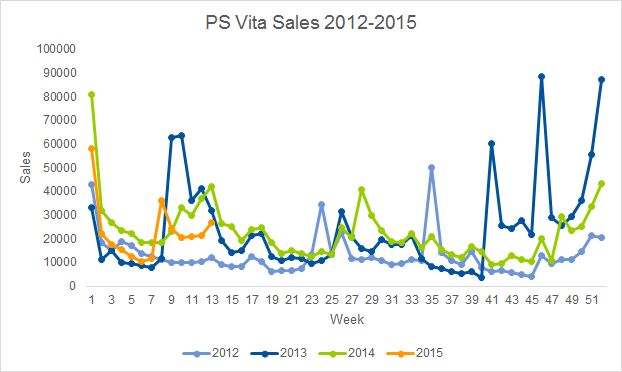 That's also compared to 31K in 2013 and 41K in 2014 for this week, which is all the more worrying. On the plus side, its still trouncing the New 3DS LL, but the PS4 has a firm and regular need now in Japan. Not all is well in PS4 land, Disgaea 5 turned up at the bottom of the chart, so expect a Vita version to help make up the numbers at some point.