on March 04, 2015
Japanese sales last week were all about Dragon Quest hitting PS3 and PS4 for 600K sales, calming the excitement of the previous week's God Eater launch. The Vita version continues to sell well, adding another 37,000 units but shows the relative poor strength of the Vita when it comes to sticking around at the top of the Media Create chart.

Given the uptick in specs on the new 3DS, how long before Bandai decides to chance its arm at a God Eater on Nintendo's side of the fence? Yuki Yuna was the highest Vita new entry managing 10K sales, while visual novel Diabolik Lovers and love adventure cake-fest Parfait managed 7,400 and 5,600 respectively.

On the hardware side the Vita and Vita TV managed nearly 25,000 sales between them, down over 10K on last week. Vita still outsold the New 3DS LL (while the combined 3DS army is still miles ahead) but PS4 sales shot up to 45,000. The Vita gets Digimon Cyber Sleuth tomorrow, which should give it another nudge in the right direction. 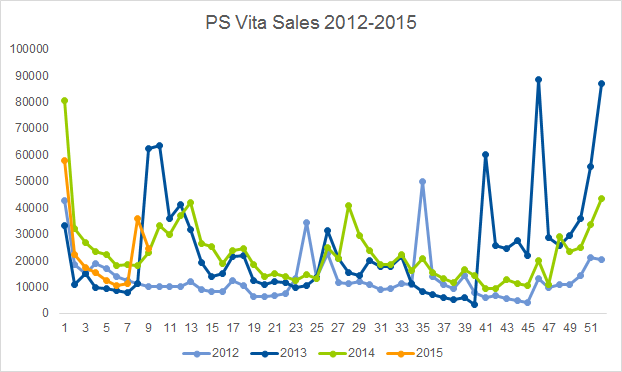