on January 12, 2015
The toilet, the final frontier! These are the bad taste jokes of Duke Nukem's developers, 3D Relams, dragged back out the sewer almost 20 years on to entertain once again. Fortunately, there's a classic and devious game behind all the smut, which makes Duke well worth a first look if you missed it all that time ago, or for a nostalgic replay (since its currently free on PS+).

While I'd much rather see the original Doom ported to the Vita, the much delayed Duke is finally here to inject some retro fun into the handheld's line-up. It plays fast and mean, with regular death coming as something of a shock to those who get nursed through the easy modes of today's CoD and other action titles.

While the combat is primeval, if not medieval, in its peek-and-shoot mechanic, its the high concept madness around the game that sees us want to keep playing. The one-liners keep coming and the quirkiness (now taken over by Far Cry and Saint's Row) especially with all the extra DLC, Pineapple bombs and all. 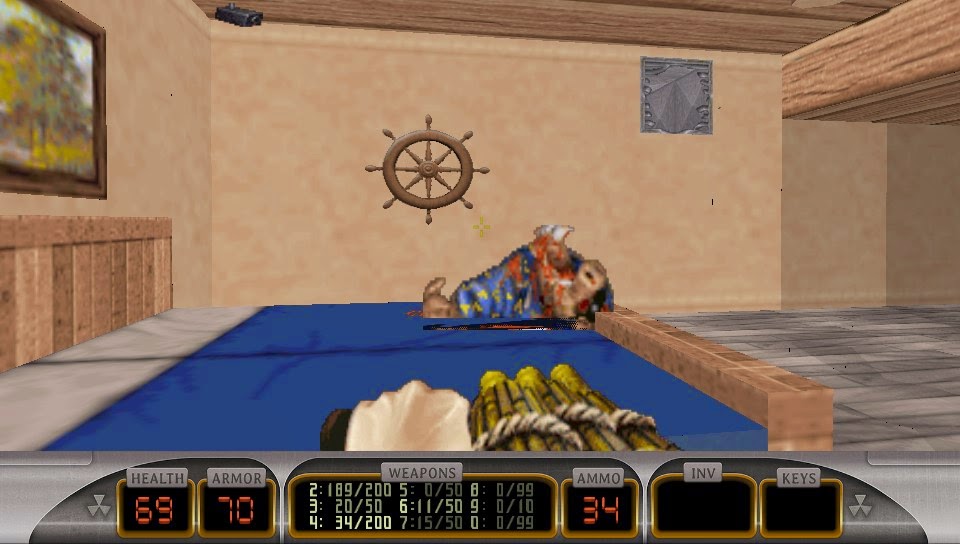 Best of all is the huge number of secrets and tricks the game has to throw at you. Race through the first level and you might find one of the dozen or so hidden elements, with extra goodies, better weapons and kit all lurking somewhere. The perfectionist in you, will see you scurrying around, and you might find most of them, but then its over to YouTube to see how to do it properly. Its the imagination the developers had that stands out, and stands the test of time.

Otherwise, its largely lots of running around and killing across the thinnest of ludicrous plot lines that seems near invisible compared to today's blockbuster back stories. Ammo is scarce, so you need to keep a tight rein of the trigger and dig around for those secrets to keep it up. The character 2D graphics look pretty grim compared to the 3D world, with working buttons and plenty of neat environmental ideas.

Some of the extra ornaments around the levels seem to have been lost from the Vita version, and the audio seems really muddy, although that could be just down to the age of the original samples. A cool new feature is the timeline reload, so you can go back as far as you need in case you got into a bit of a pickle. Multiplayer is there, which was a staple of any early FPS, but matches and opponents are thin on the ground. When you do play, you realise why most games have dedicated levels now as some levels are reduced to horrible hide-and-seek encounters.

Nowadays Duke is just a cheap laugh (if that) compared to the dropped jaws that greeted his first incarnation. However, I hope it starts a trend as Doom, Jedi Knight and a bunch of others could make a welcome reappearance on the Vita.