Media Create sales for the end of 2014, Vita's steady year

However, it still sold a not too shabby 1.168 million, and this takes the Vita over 3.5 million total sales in Japan, not bad for a badly declining market and considering that 3DS sales are down 1.5 million. 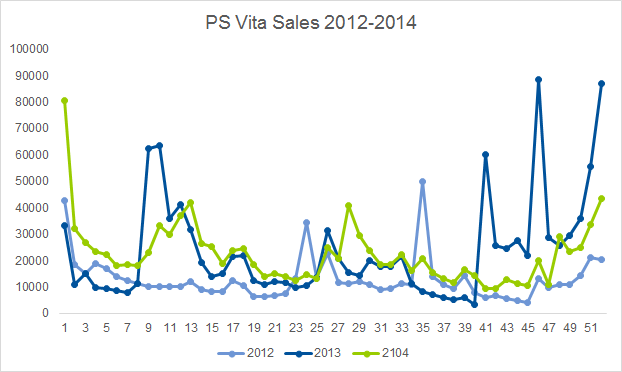 Over those two weeks, a few new titles landed. Bandai's Gundam Breaker 2 sold 83,000 on the Vita (beating the PS3 version) over the fortnight while Compile Heart's Hyperdimension Neptunia Re;Birth 3: V Century managed 26,000 last week before dropping straight out the chart. This week, Bandai's Mahouka Koukou no Rettousei: Out of Order sneaks into the chart at No. 11 selling 22,000.

Looking into 2015, Bandai's support seems to be the only thing keeping the Vita afloat, so far, with more One Piece and God Eater promising biggish sales. It will only take one big announcement (you know who) to get the Vita moving in 2015, and even a decent year should see it pass five million sales.