on December 10, 2014
Vita sales in Japan dropped 6,000 from last week, but held on to respectable numbers, selling 23,300 this week. That's as Samurai Warriors Chronicles 3 launched and Phantasy Star Nova continued to sell in the Media Create chart. Borderlands 2 is clinging to the bottom of the Famitsu chart at 30, having sold 4,500.

To highlight Sony's plight in Japan, three new PS4 games launched and only sold an average of 10K each. So the Vita remains pretty much the lead platform there, but so few new games are coming out in 2015, that the situation could stagnate. As it is, the Vita, should sell around 1.1 million in Japan this year, pretty much matching last year, while the 3DS is down 2 million sales on 2013, but still miles ahead at 2.75 million for the year.

To alarm things further NIS made a statement recently that Disgaea 5 (out next March on PS4 in Japan) needs to sell at least 150,000 for the company to keep going. If they go down, that's a lot less Vita games to come west from one of the format's best supporters. Perhaps a rapid Vita conversion is on the cards? 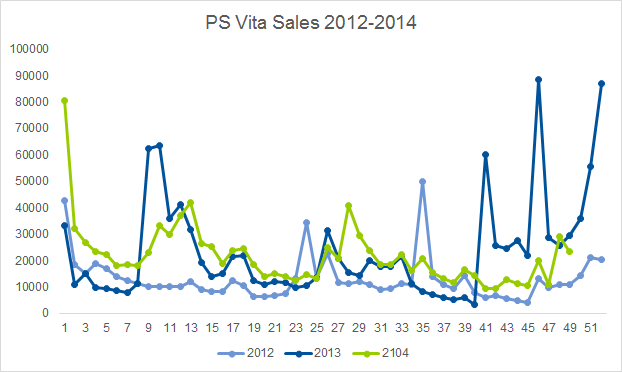