on December 17, 2014
Fancy a spot of highly-focused tower defence with your seasonal gaming? Then Final Horizon fits the bill pretty well. There goes mankind, rushing off into deep space to colonise some new worlds, and look here comes a nasty arachnid race to punt us back into oblivion. Premise set, off we go with the humans needing help across a series of solar systems, planets and moons.

Each provides a tightly scripted battle with only a few units to place and a few bases to drop them on, so each level is about figuring out the right strategy and letting the sentry guns, missiles, aerial bombardments and other systems do their job to mince up the advancing spiders and their allies.

You need to get the right balance between power units to drive your weapons, and defensive kit to keep the hordes at bay. Energy is also used to repair bases, so a steady supply is your first priority. Once your base is set you only need to wipe out a fixed amount of invaders. Do the job and its on to the next level.

To spice things up you get to use of some of the weapons from the orbital Firestrike system to the big guns of the Strikeback cannon. This changes the perspective and puts you neatly into the action for a short while. 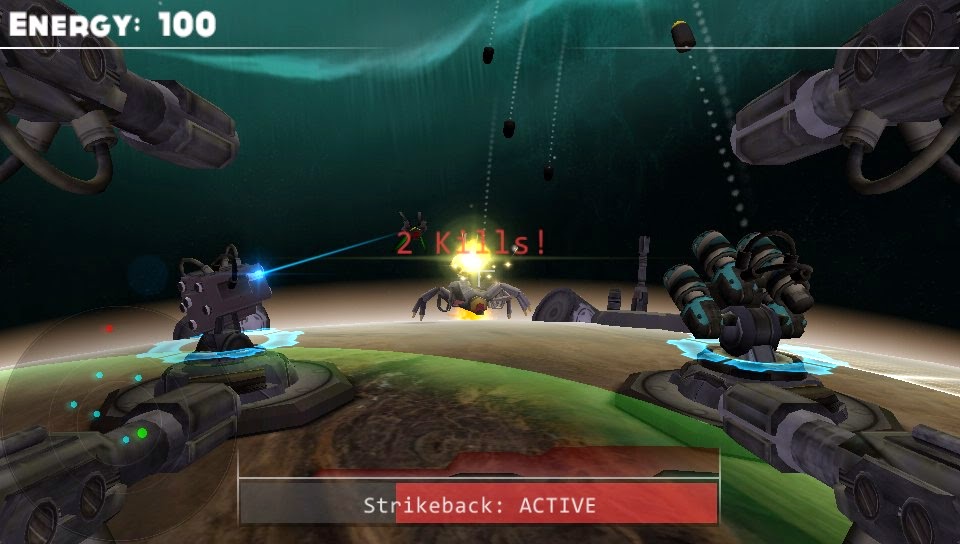 For some more longevity, there's scoring rounds and leaderboards, so you can play some traditional tower defence, but within the limits of the main game, that feels rather limited. There's also some extra DLC missions to grab, in the Dark Galaxy pack, if you really love the game.

With great weapon and bug design, this has a slight feel of the Atari revamped Battlezone on PC, but being bolted down to fixed defensive points really grated after a while. Hopefully there will be a sequel, if it sells enough and Eiconic will expand the game. Certainly each battle is finely pitched, if not exactly a fierce battle.

There are some fine touches, the world preview screens can be spun around to take a look at the gorgeous planets, and its fun to go back through the campaign missions and tidy up any objectives you missed.  Then there's some fluffs, like who gives out stacks of trophies in the VR training mode? That seems pretty pointless and the game itself offers little hardcore challenge until the bosses turn up, when everything goes rock hard.

Between those mega-challenges, there's plenty of fun in managing your meager resources, upgrading and strategising. Playable either on the trouchscreen or with the buttons, Final Horizon is a neat game with some good design, and some spots of hectic play, but a little more ambition could have easily made it a 9.