Game on for the set-top box sales battle

So, the battle is officially on for the living room gadget of choice. Google has just dropped the Nexus Player, shipping early November and Amazon's Fire TV should be an easy gift idea. Apple will join today (hopefully) with a radical update of the Apple TV, probably redesigned to bring iOS games to the big screen without the need for AirPlay from your iPhone (rendering this neat little chart totally out of date).

Which of these is most likely on your family's Christmas shopping list? They all have strengths and weaknesses, depending on what you want to use them for, and nothing is the "perfect" solution. Yes, Apple can stream games and content, but that's not "on" the device. What is clear is that the PS TV with the Vita's four-year old technology is starting to lag behind the newcomers, with buyers having cutting-edge expectations - or do you?

Things could (and should) change as more apps arrive for the PlayStation TV, but time is running short if it is to make a positive impression in the real world, now the marketing shine has been blown off. With incompatible games, limited media services, poor Remote Play network performance, things already seem grim. I'd also want to see just how much performance power the Nexus Player's Intel chip can put against the others.

There's also the likes of the Chromecast and other diminutive gadgets to consider in an increasingly crowded space by the TV. Just imagine if Sony had launched PS TV a year ago in the west? Just imagine a TV set with six HDMI ports! 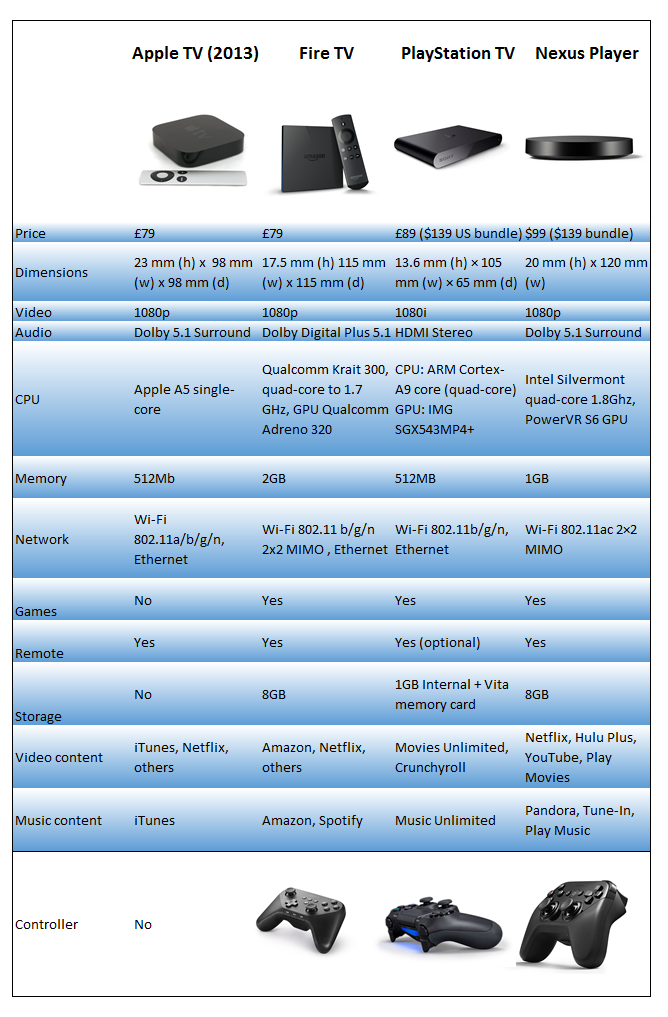 Notes: Updated to correct some memory and storage details, an early version did list all media services, but looked ugly and repetitive!