on September 30, 2014
If you're really, really old, you may remember Sega's Zaxxon in the arcades (1982). If you're slightly less old, you'll recall Hewson's Uridium on the C64 (1986). Jam those two together, perhaps with a nod to Argonaut's classics, warp forward a generation or four, and you get Futuridium (previous coverage).

The aim is simple, scour the enemy dreadnaught ships for blue energy cubes and destroy them, then find the exposed core and detonate that to destroy the vessel. Getting in your way are the very urgent need to flip 180 degrees through increasingly complex levels, dodging enemy fire, rotating scenery, all while trying to fire at the right altitude to hit the targets. Its not easy, but it is fun! And, with a handy supply of continues, Mixed Bag make sure that you don't get too disheartened by a level. On the other hand, they are pretty vicious when it comes to awarding medals with some mental times and chain requirements to achieve the best result on a level or to get on the leaderboard.

You get trophies for finishing the five zones, each of which has 10 increasingly complex levels, and more for picking up increasing numbers of medals, with a Silver Trophy for doing it in one credit and a Gold for getting all the medals.

A simple demo level sets you up on the controls, the first thing you may want to do is invert the Y-axis in settings so forward is down and back is up. Then all that stands between you and victory are the acidic beats, the a slightly freaky 3D effect and your own stupidity as you mix firing, height, turning and boost to escape a level as quickly as possible. 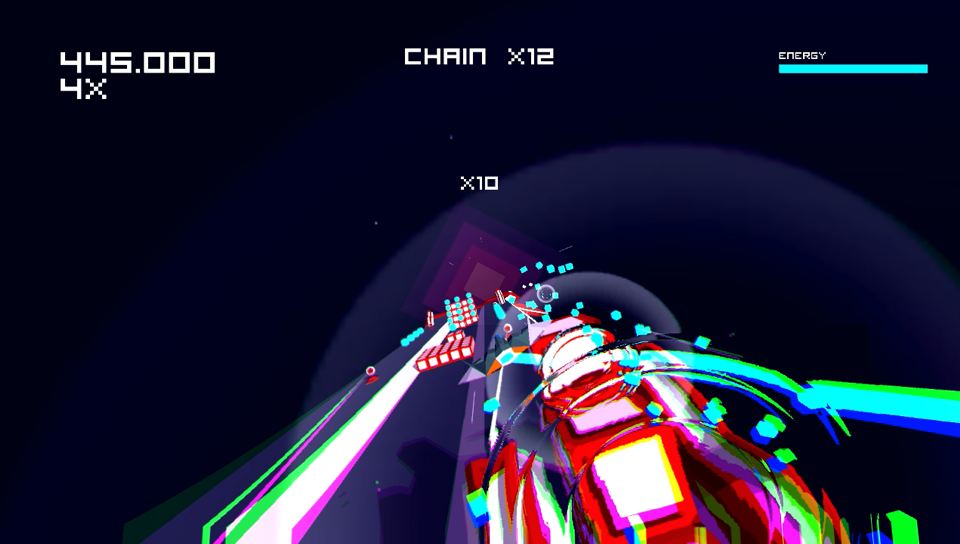 In the early going, there's a fair amount of crashing into the scenery and over compensating to line-up for a row of cubes. Modern gamers might plead for a targeting reticule and the ability to angle shots down as you descend, and they would be useful but probably take away some of the challenge and rawness of the game.

As you get into it, there's some clever, if not fiendish, level design with all kinds of shapes being thrown to keep you from your objectives. To jolly things up, there's bonus levels and new modes opening up as you progress.

While it feels simple and primitive, don't underestimate Futuridium's challenge. This is a game that can stand proudly alongside the likes of TxK, Velocity 2X and Gravity Crash Ultra as fine examples of the near-lost art of shooting.