Looks like Vita owners not getting LEGO Batman 3 DLC

on September 11, 2014
File under "eventually, this was inevitable", but it looks like the minor versions of LEGO Batman 3 including the Vita and 3DS editions won't get access to the Season Pass or the cool DLC coming for these games. Amazon has the Vita version as £5 less than the main versions, which is little consolation.


The DLC will be available individually, but there's no sign of that being available to portable owners, although the 11/14 EU release date is still some way off. Warner Bros is adding the Season Pass to flog extra content after first sale, which is fair enough, from a money-grabbing perspective. But, it could at least offer it across all the games.

Only the major consoles and PC are getting the pass. The DLC will add an extra 40 new playable characters, vehicles, missions and achievements to the roster including Bane, classic Batman and more. Why they couldn't be in the core game (which I think has some 150 odd folk anyway) will be a business decision as Warner tries to milk these games for all they are worth. 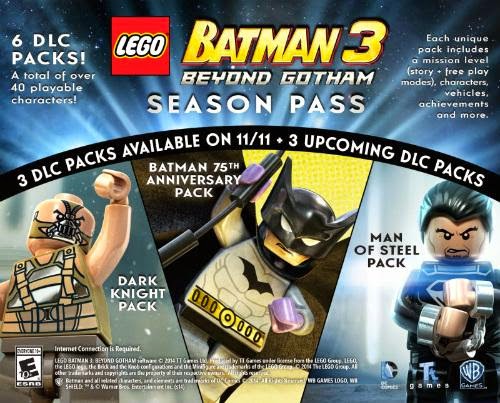