Welcome back Bust a Move 4 on PSN

on April 16, 2014
From out of quite literally nowhere comes the classic Bust-a-Move 4 from Natsume. Playable on PlayStation 3, PlayStation Vita and PSP, it'll hit PSN soon “Bust-a-Move 4 was a very successful and popular title, and fans have been asking for a re-release for years,” said CEO Hiro Maekawa.

“We were very happy to bring this classic back to new systems as a digital download!” Bust-a Move 4 features eight playable modes, including Puzzle Mode, Versus Mode, and Edit Mode, where players can create up to 25 of their own personal stages! Bust-A-Move 4 was the first title to introduce both the pulley and chain reactions. Pulleys require players to play the entire field so that the weights on each side of the stage don’t rise or fall too low! 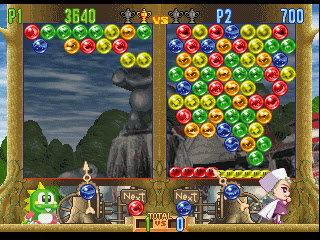