on April 25, 2014
This review could easily become a massive essay on the whole idea of crowd-funding, funding levels, user expectations and interaction between fans and developers. I'll save that for another time, but, for clarity, this is the first game I helped fund and I'm delighted I did. However, when you invest in someone else's dream, just remember it remains their dream.

UPDATE: A major update is in development to help fix many of the issues in the current version of the game. I'll happily update the review when that patch goes live.

UPDATE 2: Starlight Inception quick re-review based on the new 1.01 patch.

Well, it took ages to redownload the 2.5GB game again, then ages more to download the 2.2GB patch. When that lot was finally ready to play I reentered the world of Starlight Inception. And the good news is, yes, it is massively improved, and well worth a buy at £14 for a full space combat game on the Vita.

The Chicago mission where the original version started to go horribly wrong is a far better looking vision of desolation to fly through. Overall, gameplay is snappier, combat improved and a little, but not a lot brighter. Improvements to the mothership scenes and multiplayer means getting into the action is mercifully a lot quicker.

Starlight remains rather short, and it probably needs a PSN sale (or a cheap multiplayer-only version) to get more players into the new Quick Match lobby. The story still doesn't grab you like a space opera should, but with the Vita so light on this sort of game, you can put up with it to enjoy the zippy, varied, and rather enjoyable space combat.

So, yep, make this game a firm 7/10 now the patch has delivered on the original promise, and enjoy shooting up the final frontier on your Vita. 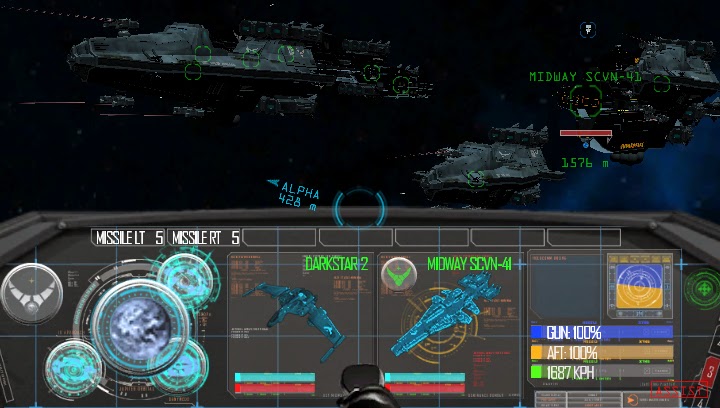 Starlight Inception takes place at the dawn of Worlds War IV, spreading out across the solar system, with a rookie pilot who's training mission is about to put him in the thick of the action. Told through news clips, and combat crew chatter, the war unfolds, creating a steady stream of missions similar to those space jockeys have been flying for decades. No surprises here, but that's what Starlight is about, with knowing wink to the many series that have gone before. 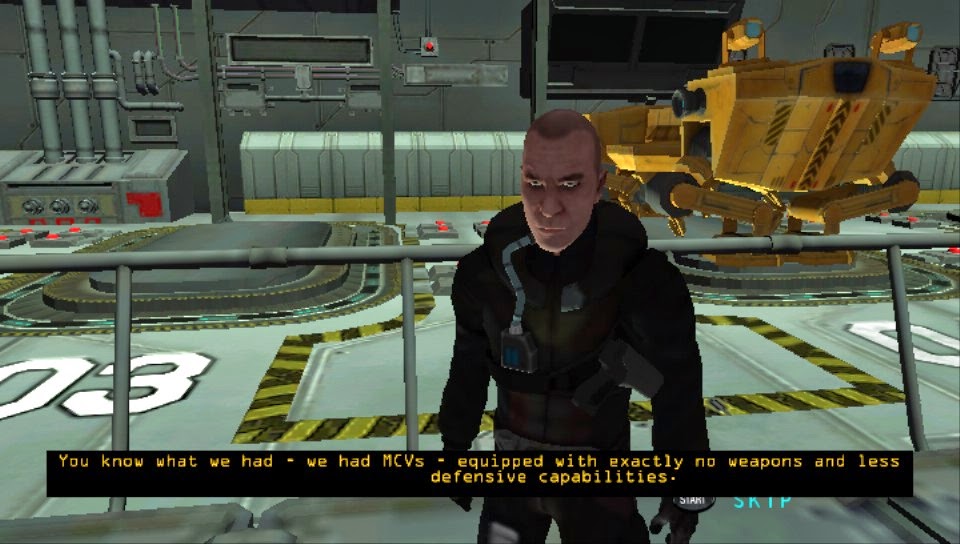 But what's important is getting in your Palomino fighter or Emancipator bomber and laying waste to enemy craft. The first missions are fun enough, with straight forward waypoints to follow, a few hapless enemies to hose down with guns, or missiles and other weaponry. Assisted targeting makes it easy to start, but you can disable that when you're up to speed. You can juggle guns, shields and repair priorities, and switch between weapons - all handled effectively on the Vita's limited buttons. 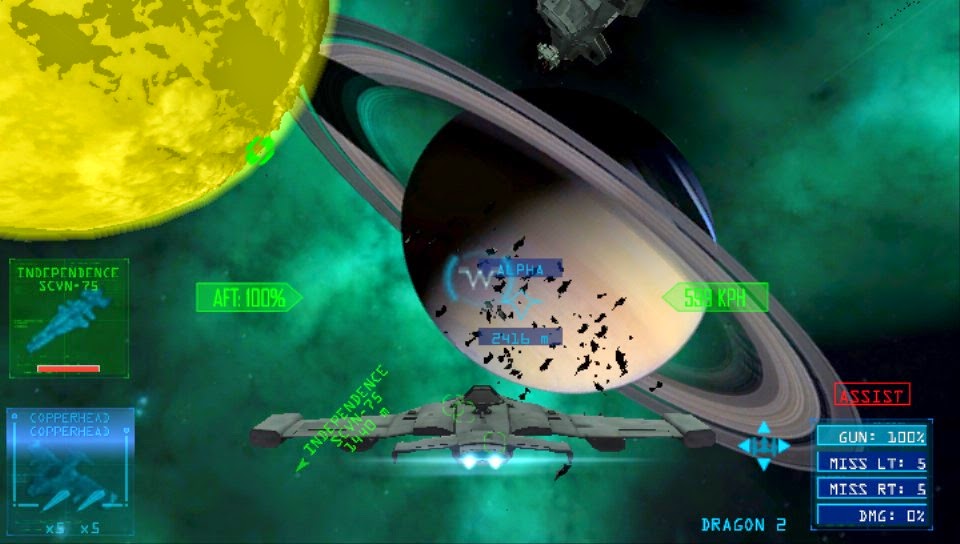 Things go a bit wrong for Starlight when we hit Chicago in the second mission. Clearly, the Vita (or Starlight's engine) can't handle the city graphics. Instead you get a gray world with self-constructing spires popping up as you fly around looking for survivors. But later, on Mars, you can zip around the landscape hosing ground targets quite happily, so I'm not sure what happened there!

Overall, this might look great on PC or PS3, and it certainly has an awesome big-budget soundtrack, but it suffers rather on the Vita with teeny-tiny and horrible fonts, and gloominess that no brightness setting can fix (these screens look about 10 times brighter than the actual game). There was a beta, but that was just a "does it work" test, rather than a feature test. Which is a shame as a lot of little niggles could have been ironed out of the game through proper feedback but hey, its Escape Hatch's dream, remember.

Between missions, the game falls between the two stools of trying to be a space opera and a fast-and-portable shooter. We don't need the slow walks around the Midway mothership, or the long monologues, a flat map and chatty updates as you fly between waypoints would have been so much better. Your wingmen can complete most of a mission without you, so your participation seems pretty optional. 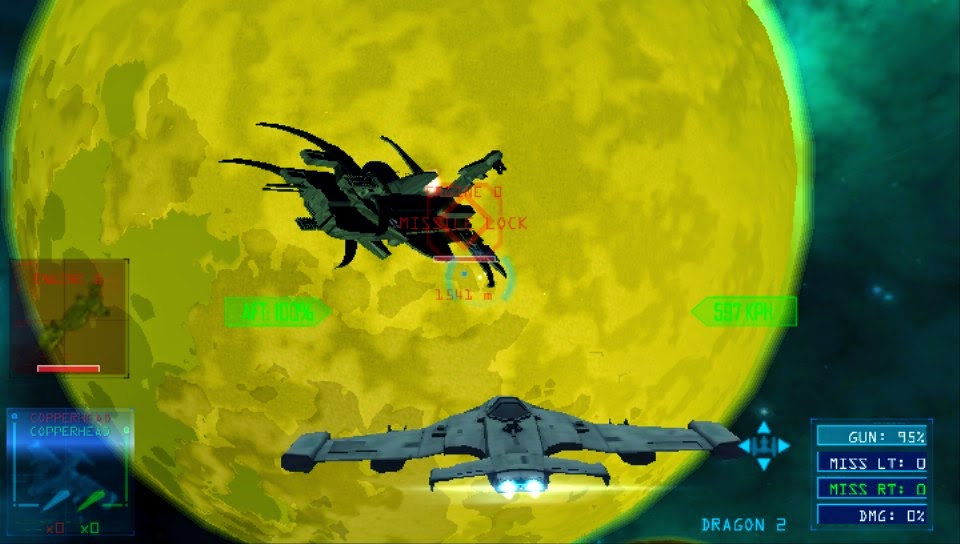 Restarting and waypoint glitches where you've just died or that skip a mission section, are also annoying, but hopefully bugs that can be fixed. If you stay focused on the missions, with the extra patrol levels to fly and multiplayer (empty to sparsely populated), then there's just about enough to see and shoot.

The graphics sometimes impress, but are mostly poor-to-fair, while the music is suitably anthem-esque. Zipping in and out of planetary atmospheres is cool, and taking on big Tao cruisers with the multiple target spots is a brief joy, even if the framerate drops up-close. Starlight manages to capture the basics of space combat, but lacks much in the way a boresight target mode, and a light for the cave section, and there feels like little real challenge to the game.

A shame the game is way too short, but taken as a starting point, hopefully Escape Hatch will build on Starlight and make something bigger, better and more innovative. I doubt that will be for the Vita but I wish them luck. For Vita owners starved of space combat, this isn't the feast you were hoping for, but its a modest snack to chew on.