on February 11, 2014
As you may have noticed from previous coverage, I've been looking forward to this game since it was first announced and followed its development pretty closely. At no point did I have any worries that Jeff Minter and Llamasoft would manage to produce a sub-par piece of digital art.

His love for the game shows in every pixel, and you can see each and every one of the little fellahs as they glow, pulse and explode. That's down to the Vita's OLED screen that delivers such clarity and the power of the processor when throwing old-school gaming sensibilities around the screen in high volumes, at high volume (headphones should be mandatory). 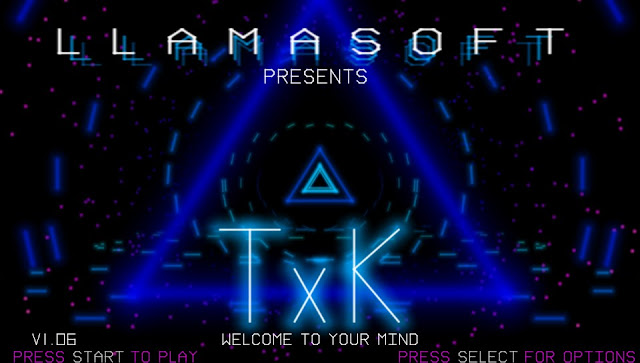 As a fan of the Jaguar version, this version is the 20:20 vision edition with similar rave anthems playing away, having lost none of the Llamasoft's sense of fun into the bargain (level 9 is called "Mooing" - my favourite). The gameplay is simple enough, spin around the edge of the web, shooting the enemies that crawl up it, collecting the particle laser, jump and AI droid bonuses that make surviving easier, then try to collect the big point bonuses and extra lives as the action and particle count hots up.

If it all gets too hectic, unleash the Superzapper with a tap of the touchscreen. To spice things up a bit, there's online leaderboards, a survival -- no extra lives -- mode and tweaked tilt-enabled bonus levels to briefly chill out to. Playing with skill will propel you up the leaderboards, but its also perfectly acceptable to whizz around madly, like a crazed sheepie, loosing off every shot you have.

In all seriousness, this is a game every Vita owner should have, alongside fellow indie exclusive Olliolli. It provides short bursts of intense action, or can suck an evening out of your life as you aim for perfection. Just one question, can someone come over and help take screenshots, as its impossible when the action is flowing.