on November 20, 2013
As usual, some numbers are leaking out of Japan ahead of the official chart updates, with the Vita reported to have sold 88,520 units, which is the best number since launch. Famitsu puts the number at 90,000. No idea on the exact breakdown, but its looking like around 50-50, with the Vita TV selling slightly less, making it a slightly inauspicious start for the combo-gadget.

God Eater 2 sold 258,826 on Vita and 119,620 on PSP, good enough for a Vita no. 1 I guess. But it looks like its out of stock in many places including Amazon Japan until the end of this week, which might dent sales for next week. 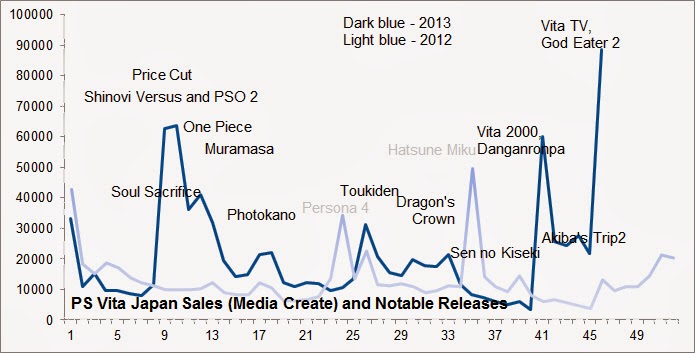 So, can Vita maintain some momentum in Japan into the winter? Will Vita TV continue to sell at this level or will it take some more big launches for it take off? I'll update the chart news when published. UPDATE: The hardware breakdown is Vita selling 46,350 and Vita TV shifting 42,172, which isn't that hot, given the hype up to launch.