on October 16, 2013
As expected (see earlier post) the Vita 2000 didn't suddenly set the Japanese market alight, however it did enough to pull the Vita out of its six week sub-10K slump, selling a hefty 60,166, according to the new Media Create data, just shy of the price-cut numbers. But with the whole country playing Pokemon, it was not really a surprise. 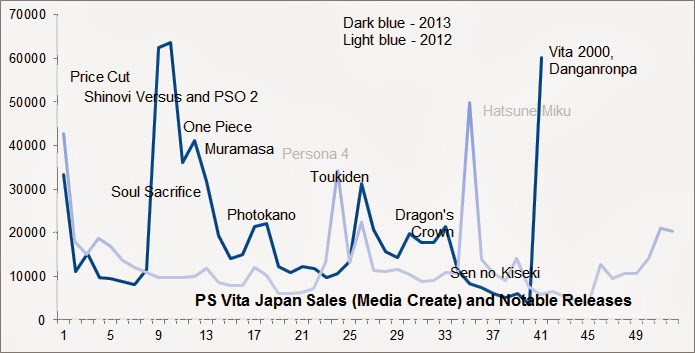 On the software front, Danganronpa Reload 1-2 gave new owners something to play, selling over 75,000 units. Sega's Pro Soccer Club sold another 33,000. Bringing up the back of the Top 20 was Arc System Works' Tsukei Gakuen, selling 4,500, making it four Vita games in the chart, as Legend of Heroes Sen no Kiseki sticks around for a fifth week and approaching 100,000 sales total.

Coming soon to the Vita are ever popular Jikkyou Powerful Pro Yakyuu 2013 baseball which picked up a decent score of 34 in the latest Famitsu. Biggie God Eater 2 (with a hardware bundle) is now less than a month away, launching alongside the Vita TV, with that lot plus the Final Fantasy and other bundles, Vita has no excuse not to sell well through to the end of the year.