on August 28, 2013
Outside of Japan, where the 3DS is king, portable sales are pretty much in the mire. Sony has jut cut the Vita's price but Nintendo has just trumped that with a whole new console. The 2DS is a non-3D 3DS machine, cheap at £109 or $129 which puts it in the price range of most toys, and well below the Vita's £169. 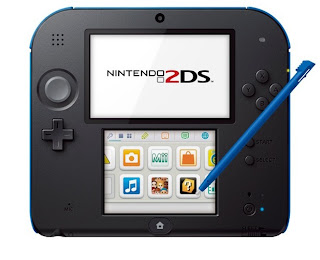 The device is a flat one, no folding to protect the screens and is supposed to be one big screen under all that plastic. With still no dual-sticks it limits its value to core gamers, but is so cheap that kids could lap it up.

While Nintendo has done a good job shifting the 3DS, this apparently backward step means under-7s can get a 2DS, avoiding the whole 3D eye strain thing. It can help shift lots of cheap games from the early catalogue and with a Wii U price cut, also help make Nintendo's big screen gaming less of a disaster. Or it could be ignored like the mini Wii, time will tell but Nintendo has definitely left Sony looking pretty pricey in sticker stakes.