Dragon's Crown hangs in there in the Japanese Chart, Vita sales steady

on August 14, 2013
The new Media Create charts are out, and Dragon's Crown sticks in the top 10 for the Vita at No. 9, shifting another 11,000 units. That brings it just a few shy of 100,000 physical sales and it was doing very healthily in digital sales too. The PS3 version is still in the top five, increasing sales by 50%. No new entries for the Vita this week, with Sega's Yakuza HD port failing to make a splash for the Wii U. 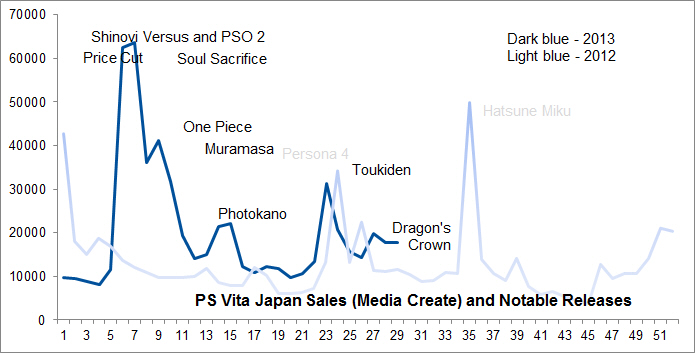 The Vita sold another 17,600 which is flat (not surprising given the lack of major releases since Dragon's Crown) but basically double what it was selling last year. Last week's details here, Mind Zero has vanished pretty quickly. The PSP is about six weeks of sales away (still doing 6,000 a week) from hitting the 20 million mark, hope Sony is ready to celebrate.
charts dragon's crown japan media create ps vita