on July 26, 2013
Develop magazine has put together an ebook on the hot 100 UK developers. While browsing through it, I was pretty surprised to see the Vita just ahead of both PS3 and PS4, but not at all surprised to see the huge lead for iOS and Android, with PC and Mac also still well ahead. 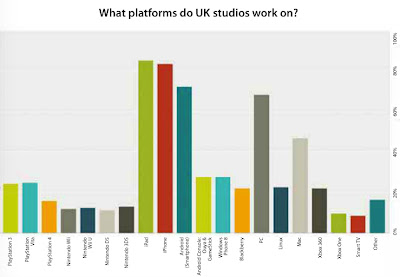 I'm not sure when the data was compiled, but with top Indies on the list like FuturLab alongside established brands like Guerilla Cambridge in the list plus newcomers like Roll 7 and Mike Bithell, you wonder how much of that statistic is down to Shahid Kamal and team's hard work.The natural question would be, how long will they stay working on Vita if sales don't pick up and the PS4 and Xbox One continue the indie love in?

Note, a lot of companies in the directory at the end, aren't games developers but design services who "dabble" in games at best. Which makes you wonder about the credibility of some of the other areas in the book.
developer futurlab indie ps vita shahid kamal sony uk studios