on July 29, 2013
Escape Hatch has put out another newsletter for its Kickstarted project space combat game Starlight Inception (full trailer here). The good news is the developers are close to a beta release, due in the next week or so, according to the team.

Going into beta now, means the release date of the end of August is unlikely to be reached, but I'm sure we'd all rather see feedback from the beta implemented for a better game than the usual shoddy rush jobs by certain big-name publishers. November looks like being the new release date. If you invested in one of the higher tiers for the game, then you can be expecting something like this cool model as part of your package. 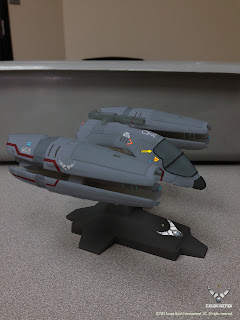 For those interested, leader programmer, Adam Larson, has contributed to the latest update, with some focus on efforts toward the Vita version, which naturally enough has to be a little more focused than the PC edition:

Since the last update we’ve made great progress on many fronts including Vita optimization, PC graphics, performance, and gameplay improvements. As you’ve probably seen by now we released our first trailer, and the feedback has been amazing. There has also been some really great suggestions and we are listening. Controls were brought up as still looking rigid by some of you. We would like to say controls have been improved greatly since the trailer, but we hope to do even more. Just from your feedback, we made changes that make it look and feel so much better. We want to thank each and every one of you for your kind feedback, it really motivates all of us to put out the best possible project.

As we’ve been building scenarios in each level as well as setting up cinematics and driving the flow of the story, we’ve found a lot of things we want to improve in the AI. That has been one of our current goals, and it’s going to be ongoing throughout the project. We’ve also really been pushing towards getting our multiplayer maps built and ready for full testing. We are working on different strategies and gameplay elements to really enhance the multiplayer experience. Vita optimization has been ongoing, but we feel like we are finally making good progress on it. Just today we got most of the levels loading and running on the Vita. We still have a few shaders that need to be optimized for the Vita as well as some meshes the artists are working on. Overall though the Vita is looking awesome, and is very close to being fully playable from beginning to end. Some of our maps are very large, and it has been quite a fun challenge to get everything working.