on July 29, 2013
The successor TV cartoon series to the Clone Wars, Rebels is due to hit the small screen next year, and a first teaser image was shown at a recent fan event (art below, the focal ship is a Ghost). With its younger-viewer focus I'd expect to see at least one game, similar to the PSP's Clone Wars title, ignoring any possible LEGO off-shoots hit the Vita and 3DS. 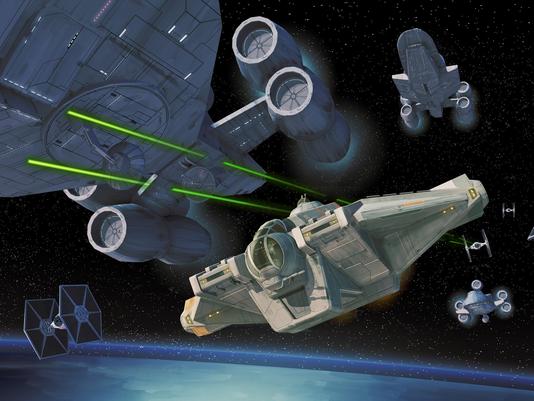 With some 20 Star Wars games cancelled over the life of LucasArts' existence, hopefully Disney will be a little more forthcoming with its digital entertainment, and the Vita would be an ideal format for an arcade adventure game based on the adventures of the formative rebels.

Hopefully the Vita will be selling better by the time such a decision from the bean counters is due, and has a few more hits behind it. But who wouldn't want to go whizzing around the galaxy, fermenting the rebellion?