on July 15, 2013
Only the press release to go on for this, but yet another fun sounding indie coming our way.

Today, indie game studio The Layabouts formally announced Collectems, a monster-collecting RPG. The goal of the project is to combine influences from classic RPGs with modern roguelike elements and a focus on player choice, exploration, atmosphere, and replayability.

UPDATE: Lots of hits coming this way as news source rediscover this game, a year from the original story, development is still in progress, with an update from March discussing the second hero, Aspen. Will check with the team and find out if there's an ETA. 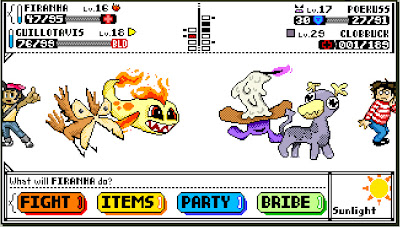 Assuming the role of an adolescent in the relatively isolated Tamota Peninsula, players venture into a land where strange mutant creatures called Collectems have ravaged the natural ecosystem. Taken in as anything from household pets and workplace assistants to biological weapons of mass destruction, they captured the hearts of millions, becoming a full-blown culture-defining phenomenon. A fire at their father’s business, coupled with his mysterious disappearance, leaves the player responsible for a lifetime’s worth of debt. In order to pay back what is owed and rebuild the company, they set out into the world, using the unique capabilities of their Collectems to earn a profit.


Collectems is being actively developed for PC, Mac, and Linux, with PlayStation Vita also being targeted. No plans for availability, release date, or additional platforms have been finalized at this time. Further details about Collectems can be found at the official project website, collectemsgame.com. For any additional inquiry, visit The Layabouts at wearethelayabouts.com for contact information.