on July 22, 2013
Namco's God Eater 2 appeared on Amazon Japan last week and the Vita version has shot straight to the top of the most-wanted chart, out-pacing the PSP edition which sits at No. 11. Sure, the game isn't out until November but the level of interest has to be good news, given the lack of you-know-who-Hunter. 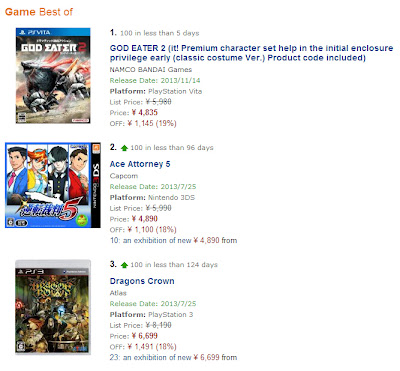 The fact Vita games are now out-stripping their PSP counterparts, as happened with Toukiden, is also a further indication that Japanese developers will move their focus to the Vita. The portable version of Dragon's Crown is only a few spots behind the PS3 version, so should do well on release this week.