10 days until Dragon's Crown goes on-sale in Japan, a Vita-seller for the summer?

on July 15, 2013
July 25 sees Dragon's Crown go on-sale in Japan (just a week or so before the U.S. release), the game has been marketed to the Gods and back, with endless daily coverage, massive cleavage and a deep game underneath it. The question is will it be a Vita seller or another middling-hit like Muramasa and Toukiden (where I get all excited about a game selling 100K in one week). 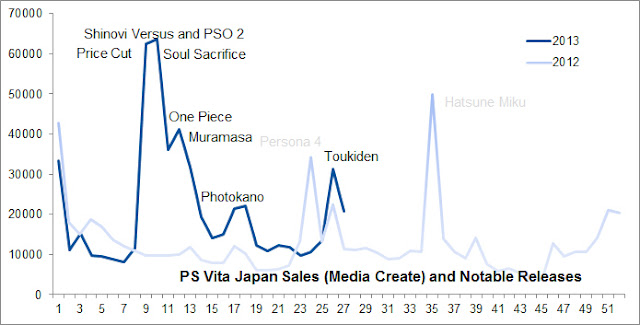 It has been high on Amazon Japan's pre-order list for some time, suggesting interest is there, but the big question is how high can it go, and will it sell hardware? There are no bundles that I've seen, so it'll need to beat at least 150,000 which is a "good" number for a decent Vita game, to meet existing owners needs.
After that, I guess you're looking at about 20,000 new Vitas sold for every 100,000 sales.

Of course, putting a spanner in the works is the PS3 version, which could sap Vita sales and interest, although its best hope remains in Japan where portability is king. The Vita version sits in the top 15 games on Amazon Japan's hourly chart, the top three on Rakuten books, both just a couple of spots behind the PS3 version.

Any thoughts or predictions on numbers for this appreciated.