Vita hardware and bundles go down in price on Amazon

on May 09, 2013
Not sure exactly when this happened, but the Vita hardware has had a price trim on Amazon, possibly ahead of an official price cut, or just surfing on the tide of supply and demand.

There are some even better offers from other Amazon partner retailers. UPDATE: Must have been a boo-boo somewhere, the 3G version has pinged back up to £199 as I was typing. 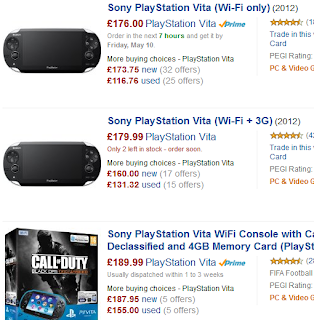 Historical prices this year were £220 until March and £195 until this week for the base WiFi unit. Anyone else spotted reductions on other sites or around the world. Is this related to Sony's forecast for weak Vita sales or not? Either way, its not much of a price cut, which would have to be £149 to really kick sales off, but if you want a cheaper Vita, feel free to jump in now.