on May 09, 2013
Sony has reported a profit for the last financial year (to the end of March) of $458 million, its first since 2008, and expects a profit of $2.3 billion for the current year. Mobile was the big winner for Sony, up 100% on last year, so expect more focus on Xperia products, while gaming was down 12% as the Vita struggles to take off and the PS3 continues to wind down ahead of the PS4.

Here's the key slide showing Vita/PSP sales, which had their strongest quarter of the year in the Christmas Q3, diving in this quarter (which is kind of traditional) in both game and hardware terms, but its not exactly a rocket ship is it? Find all the gory details here. 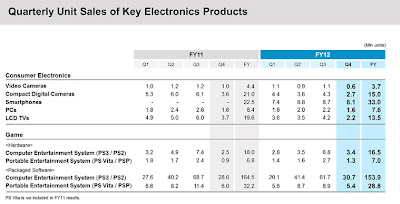 On, the bright side, Sony met its much reduced outlook of seven million handhelds and has put down a target of just five million for the 2013 financial year, a number likely to kill any interest of big publishers in making a major investment. I'd guess that's 1.5 million PSPs and 3.5 million Vita devices, which is basically selling 20,000 Vitas a week in each main territory (which it is only just doing in Japan) plus pocketfuls more around the world.

If it misses that figure then god help the Vita and all who sail on it. Sony barely made a profit on games, which could be expected in this between-cycle phase, but if the good times don't come back, I doubt there will be a PS5 and certainly no Vita V2. Of course, all it will take is one globally-successful breakout game for the Vita, but realistically speaking that's not happening, and won't happen based on those numbers.

One way Sony could expand the user base is a Vita Xperia combo device, something like a full-Android gaming phablet that runs Vita cards and PSN games, but there is little guarantee of sales in such a savage market.
financials harfware sales NYSE:SNY ps vita sales sony